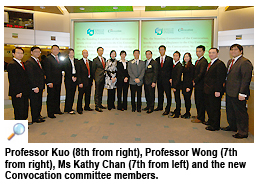 The inauguration ceremony of City University of Hong Kong’s (CityU) Second Standing Committee of the Convocation was held on 9 February, setting the stage for their continued effort to strengthen the ties between alumni and their collective bond to the University.

Professor Way Kuo, University President, said he was impressed to see an increasing number of alumni supporting the University through various platforms. He reiterated his request for every alumnus to contribute. “CityU is an important university in Hong Kong and you are the products of CityU. You all play a vital role in contributing to CityU’s public image,” said Professor Kuo. 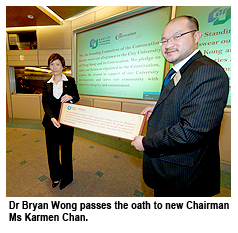 Ms Karmen Chan thanked the alumni and friends for their support, trust and encouragement. “The alumni family is growing every year and although it is a challenge, we have the momentum to keep it growing. The Second Standing Committee, comprising alumni who were once active student leaders, pledged to devote their experience to bringing together alumni and CityU,” said Karmen.

The establishment of the Convocation as a statutory organisation was approved by the Council. Its establishment on 1 January 2007 marked an important milestone in the history of the University’s alumni, creating a significant link between the University and its growing band of alumni.

Membership list of the Second Standing Committee of Convocation