Throughout modern history, epidemics and infectious diseases spreading from animals to humans have battered many cities and countries, claiming human lives and causing huge economic losses. The World Health Organisation says “about 75% of the new diseases that have affected humans over the past 10 years have been caused by pathogens originating from an animal or from products of animal origin.” 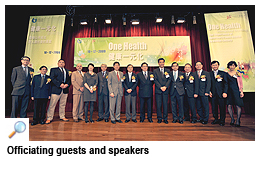 In response to these global concerns, City University of Hong Kong (CityU) hosted the One-Health International Workshop, on 10 December, to promote the concept that animal and human health are inseparable components in safeguarding the public’s health and well-being. This key workshop provided a forum for international experts to examine the links between animal and human health and the importance of building a quality veterinary infrastructure to prevent zoonoses. The One Health concept unites four key areas as it seeks to improve human health, namely medicine, veterinary science, agriculture and wildlife.

The Hon Leung Chun-ying, Council Chairman, attended the workshop. “It is testament to the quality and importance of this workshop that we have brought together such a remarkable amount of professional talent,” he said in his introduction of the first keynote speaker, Professor David Ho. 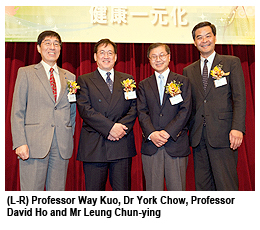 Professor Ho is the Scientific Director and Chief Executive Officer of the Aaron Diamond AIDS Research Centre in the US and Time magazine’s 1996 Man of the Year. Professor Ho has been at the forefront of AIDS research for 28 years and is renowned for his development of antiretroviral therapy that resulted in unprecedented control of HIV. His talk at the workshop was entitled “AIDS, SARS and Flu as Zoonoses” and provided an insightful look at the sources of these diseases that originated in animals before being transmitted through human-to-human contact.

Professor Ho said research indicated central African chimpanzees were the source of HIV and that humans first contracted it 80-100 years ago. Like AIDS, SARS was also a zoonosis, a pathogen passed from animal to human, transmitted to human from bats via civet cats. “In recent years, the human population has been repeatedly 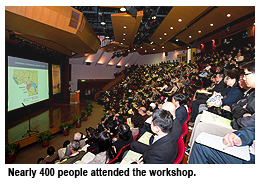 threatened by avian H5N1 and swine H1N1 influenza viruses, both of which have their origins in aquatic birds,” he said. Human exposure and immunity to these diseases and preventative measures should ensure they do not become catastrophic epidemics, he concluded. “What I fear most is the unexpected.”

In his welcome remarks, Professor Way Kuo, President, said the workshop was part of a concerted effort by CityU to raise awareness and promote discussion of the importance of veterinary public health in this part of the world.

Delivering the opening remarks, Dr the Hon York Chow Yat-ngok, Secretary for Food and Health, HKSAR Government, said that in his five years in the post he had responded to about 10 late-night or weekend emergency calls, with most of them relating to zoonotic diseases. “The integration of veterinary science into public health has never been more vital,” he said. “Globalisation of trade and the ease of international travel are just two of the numerous factors that demand we promote the notion of One Health.” 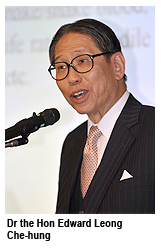 At a special luncheon speech, Dr the Hon Edward Leong Che-hung, Chairman of the Elderly Commission, HKSAR Government, discussed the importance of animal health to the wider community. He highlighted the social, economic and political upheavals that had taken place in the advent of epidemic outbreaks such as Creutzfeldt-Jakob disease, and listed three solutions for the future, namely “changing cultural habits; improving animal health and minimising ecosystem disruptions.”

Professor Way Kuo expressed his gratitude for the support of nearly 400 guests and speakers who attended the one-day workshop. He pointed out that Hong Kong, as a civilised world-class city, should take the lead in promoting the One Health concept and make a contribution to the advancement of public health in Hong Kong and Greater China by seizing the opportunity to promote research and education in veterinarian medicine. 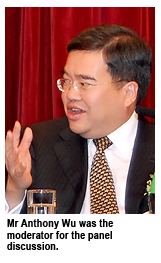