A fascinating laser show with projected images illustrating the history of City University of Hong Kong (CityU) and showcasing its excellence in professional education and contributions to society were among the highlights of the opening of its Silver Jubilee Anniversary Banquet held on 6 December. The Banquet served as a celebration and reunion, bringing together 900 friends, supporters, alumni, students and staff. 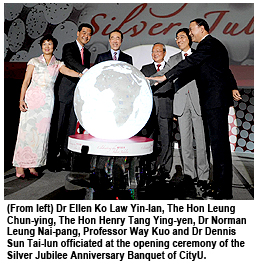 “Twenty-five years is a relatively young age for a university but CityU has come a long way. We are now widely regarded as one of the best 150 universities in the world,” said Leung Chun-ying. He also pointed out that university education for the new generation is not more of the same repeated all over again. The new Strategic Plan positioned CityU as a leading global university, renowned for its excellence in professional education and outstanding scholarship in problem-focused research.

Henry Tang congratulated CityU on its job well done. “CityU has made, and I’m sure it will continue to make, remarkable progress,” he said. He also praised CityU for achieving an impressive ranking at 124th in the renowned The Times Higher Education Supplement’s World University Rankings. “This is what I call quick learning,” he added. He also looked forward to visiting the Multi-media Building next year when it is completed, and seeing its impact to the industry. 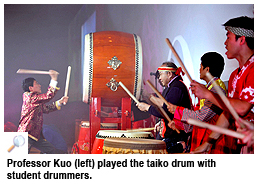 Adopting the theme “Transformation”, the Banquet featured an innovative performance and video presentation showcasing the advancement of students and alumni and the University’s outstanding achievements in professional education and research in a relatively short span of 25 years.

The inaugural Distinguished Alumni Award presentation during the Banquet offered recognition to prominent alumni and proudly showcased the journey undertaken by CityU students and alumni as they transformed from students to professionals and experts who contribute to society. Their achievement has underpinned CityU’s reputation for academic excellence and nurturing of leaders. 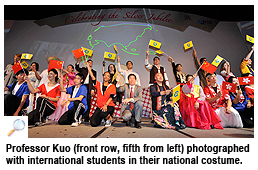 Professor Kuo commended, in his vote of thanks, the faculty and staff, Council chairmen and members and former presidents for their dedication over the years. He also took the opportunity to express gratitude to the Hong Kong Government and UGC, as well as donors, alumni and other supporters for helping the University grow and prosper. “The success of the University is not possible without the unswerving and consistent support from various stakeholders of the University,” said Professor Kuo.

The finale of the evening came with the City of Globalisation performance. The President, dressed in traditional Chinese costume, played the taiko drum with 25 other drummers. A hip-hop dance performance followed, with a parade of international students accompanying the song, We Are the World. The entire programme was performed and orchestrated by members of the CityU community.