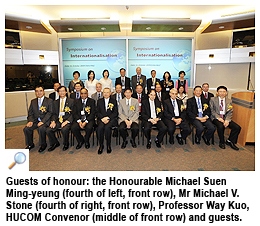 The Honourable Michael Suen Ming-yeung, Secretary for Education of the HKSAR Government, and Mr Michael V. Stone, Secretary-General of the UGC, were the guests of honour.

“The government has outlined its plan to develop Hong Kong as the regional education hub in the 2009 Policy Address. Hong Kong has excellent geographic location, good blend of Eastern and Western cultures and world class universities. To stand out from its neighbours, it requires shared vision and concerted efforts of the government, institutions, staff and students,” Mr Michael Suen said.

Mr Suen also gave an account of the internationalisation of Hong Kong education. The number of non-local students was around 9,200 in the 2008-09 academic year, representing a 15% increase from the 2005-06 academic year. He expected a further increase in the numbers after the launch of the four-year curriculum in Hong Kong universities.

Mr Suen stressed that quality assurance in Hong Kong institutions and collaboration between local and overseas institutions are especially important to internationalisation in higher education. 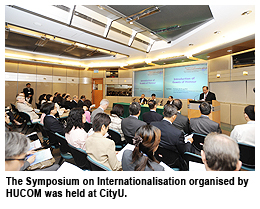 Professor Kuo also emphasised the importance of quality in higher education to sustain Hong Kong’s competitiveness as an education hub in the international arena.

Quoting what the late US President John F. Kennedy said five decades ago about the problems people facing at that time, Professor Kuo said, “There are uncharted areas of science and space. There are unconquered pockets of ignorance and prejudice. There are unsolved problems of peace and war.”

“These are international challenges and we are handling them altogether. I am sure that we will learn something from each other about the quality and practice of internationalisation in this symposium,” Professor Kuo added.

Professor Kuo and Mr Stone of UGC both spoke about the latest achievements of world rankings of local institutions. Mr Stone said it was a very good result with five Hong Kong universities among the top 200 in the world. He added that institutions are encouraged to identify their niches and compete internationally on that basis.