The Hon Leung Chun-ying, Council Chairman of City University of Hong Kong (CityU), was conferred the degree of Doctor of Social Sciences of Lingnan University on 29 October in recognition of his contribution to education, business and the community. 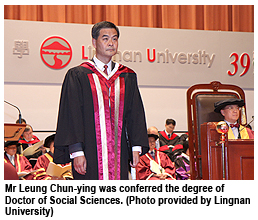 Mr Leung has been extensively involved in public service for many years. In addition to his role as convenor of the non-official members of the Executive Council, he is also a member of the National Standing Committee of the Chinese People’s Political Consultative Conference, chairman of the One Country Two Systems Research Institute and chairman of the Hong Kong Coalition of Professional Services. He has also been very actively involved in higher education, serving as Council Chairman of Lingnan University and CityU, developing Hong Kong’s valuable human resources as a way to enhance competitiveness.

Below is the full text of Mr Leung’s address.

In Hong Kong, we have no coconuts on trees or oil reserves underground; there are no extensive paddy fields to feed us all. That Hong Kong can become a modern metropolis and its people can live a comfortable life depends primarily on talent. In only two to three generations, Hong Kong people have made extraordinary achievements. As a result of mass population migration and economic limitations in the past, the overall educational level of the Hong Kong population was not high. Nevertheless, Hong Kong society, from the government, the education sector and educational institutions to parents and students, has always paid great attention to education. The government is keenly aware that education is the only way to improve the overall quality of its people; educational institutions remember that education is the best way to pay back society, and the education sector understands that education is a lofty cause that calls for perseverance and devotion. As for parents, they know that education lays the best foundation for their children, and offers the biggest hope for their family to move up the social hierarchy.

For some families in Hong Kong, university study is a matter of course for their children. But for most families, university education cannot be taken for granted. University education is a resource-intensive undertaking, which in Hong Kong requires a lot of funding from the government. In contrast to the high unit cost of education, the per capita income of most Hong Kong people is relatively low. The monthly income of half of the working population of over 3 million is below HK$10,500, while half of the households earn less than HK$18,500 a month.

I recently analysed the future prospects of the graduates of a Band 3 high school, and found that among last year's Form 7 graduates, only 2% got a job and only 17% were admitted to local or overseas universities. The remaining 76% continued to pursue a sub-degree course of education, with most of them repeating Form 7.

Every admission to the university is a story of individual dedication and hard work and that of the family behind. Each university student bears on his or her shoulders the best expectations of society and family. Whether the past efforts of students and their parents will pay off, whether the expectations of society are answered, and whether the hopes of taxpayers and all those selflessly devoted to education are fulfilled depend critically on the quality of education. As such, while we should pay attention to the number and allocation of university places and the distribution and financing of university expenses, we should attach even greater importance to the quality of tertiary education. All staff members of the university must cherish every opportunity to educate, and students themselves must cherish every opportunity to learn.

Chancellor, Council Chairman and friends, we choose to take up the responsibilities of university education because we understand the importance of education. We know the significance of education goes far beyond conferring a certificate, far beyond teaching youngsters the skills to make a living.

With a long-standing history of education, Lingnan University has contributed much to society. As Council Chairman of Lingnan University from 1999 to 2008, I considered the appointment the greatest honour society had conferred upon me. Those nine years have helped me understand the significance of tertiary education, as well as the traditional spirit and model of education at Lingnan. I am grateful to Chancellor Tung Chee Hwa and Chancellor Donald Tsang for the appointment; I appreciate the support of President Edward Chen, President Chan Yuk-Shee, all Council members, the Lingnan Education Organisation as well as our alumni and colleagues.

"Once a Lingnanian, always a Lingnanian". I will always remember the days I spent at Lingnan, and cherish all the friends I made here. I hope every one of you will continue to support the tertiary education of Hong Kong. I deeply believe that the Lingnan spirit will continue to shine, and inspire every person who intends to develop a career in the education sector.