City University of Hong Kong (CityU) community turned out in large numbers to celebrate its silver jubilee at a memorable CityU Banquet on 21 October at the University Circle. The annual event was organised by the Students' Union of CityU. 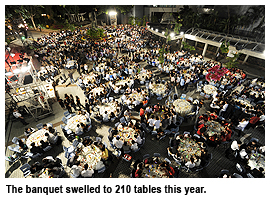 Dr Leung, who entered the Council the second year after City Polytechnic was established, said there were less than 1,000 students back then, but the University has grown to be one of the biggest in Hong Kong. “It was not an easy feat for CityU to grow so much and soar to 124th in the world university rankings,” he said. 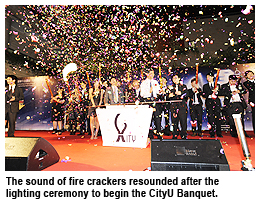 Like Professor Kuo, Leung Chun-ying was joining the CityU Banquet for the second time this year. He told the crowd that when he graduated 32 years ago, Hong Kong was an insular place focused on its own development. But while Hong Kong’s links with the mainland now grow stronger every day, CityU has a much bigger platform with which to reach its full potential.

Professor Kuo, however, showed how intimate CityU community is with its alma mater by claiming that "the shortest distance on earth" is the distance "between you and CityU".

The festive occasion featured joyful singing, dancing, magic and live music performances. A special programme involved a time capsule, with written wishes collected from all the guests, plus special items from the three guests-of-honour and Billy Li On-yin, President of the Students' Union.

Dr Leung submitted a piece of paper with the memorable day of 18 June 2008, the day when the first batch of Honorary Fellows was conferred by CityU. Professor Kuo chose a photo frame with the CityU Banquet’s date and details printed on it. Leung Chun-ying selected a press release, event photo and poster of a seminar he recently hosted at the Student Residence. Billy Li chose to put in his souvenir tee-shirt from an exchange event at Peking University. The time capsule was sealed before the closing of the Banquet and will not be reopened until the centenary anniversary.

The event concluded with a countdown to the 25th anniversary of CityU on 22 October.