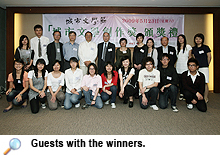 City University of Hong Kong (CityU) students claimed 12 of the 20 prizes on offer at the fourth City Literary Awards for young Hong Kong and Macau writers. The prize presentation ceremony hosted by CityU was held on 23 May. The excellent results across four competition categories reflected the students’ language proficiency and sound understanding of literature.

Under the theme “Rhapsodies of Time”, the writing competition received an overwhelming response with 367 entries. Among the entries, about 90% came from Hong Kong, with the remainder from Macau. CityU students garnered the top three places in the Art and Cultural Criticism category; the top three places and a merit award in the short story category; champion in the poetry category; and second place and three merit awards in the prose category. The other recipients were students from other tertiary institutions in Hong Kong and Macau. All winning entries will be compiled in the fourth issue of City Literature, to be published at the end of the year.

“Most of the entries received this year are very well written, with an encouraging response to the new addition of Art and Cultural Criticism category,” said Professor Cheng Pei-kai, Chairman of CityU’s Cultural and Sports Committee and Director of the Chinese Civilisation Centre at the award presentation ceremony. “The success of the competition is attributable to the support lent by our distinguished, renowned writer guests. I would also like to express sincere gratitude to the Hong Kong Arts Development Council, the Macao Foundation and Robert H. N. Ho Family Foundation for their support. It is our hope that the competition will continue to provide more writing opportunities to young people in Hong Kong and Macau and boost their interest in writing.”

“The annual City Literary Awards provide an opportunity for young writers to showcase their writing talent and have their works compiled for publication. This will surely give them the momentum to pursue further creative writing avenues,” said Ms Helen Ng, Chief Executive Officer of Robert H. N. Ho Family Foundation. She added that the Robert H. N. Ho Family Foundation would continue to work together with CityU to promote literary and art education and nurture young writers.

Category winners were invited to share their thoughts about writing. Li Xuan, a recent graduate of the Master of Arts in Media Cultures from CityU’s School of Creative Media, won the top award in the art and cultural criticism category for her work titled A runaway in the chronicle of life - Critique on the new version of Kunqu opera ‘Jade Hairpin’ by Professor Pai Hsian-yung. She started to write commentaries in 2005, finding the format suitable for personal expression. After enrolling at CityU she took part in a Kunqu opera training course organised by the Chinese Civilisation Centre and started to learn about this traditional Chinese art and wrote her first commentaries. “Writing criticisms helps me review the growth of my mind,” said Li Xuan.

The champion of the short story category, mainlander Wang Zhe, is a Year 1 Master of Philosophy student at CityU’s School of Creative Media. Her winning entry Loneliness grows is an account of a series of related incidents that happened in the local community in 2008. She wrote the story in two weeks, in a process that proved cathartic. “When I first came to Hong Kong, I was a stranger to the city. My living quarters were quite small too. Then I started to reflect on how individual private space is getting smaller and smaller,” said Wang Zhe.

The City Literary Awards form part of the City Literary Festival. It was organised by the Cultural and Sports Committee, Chinese Civilisation Centre and CityU’s Department of Chinese, Translation and Linguistics. The Hong Kong Arts Development Council and Macao Foundation are co-organisers and the Robert H. N. Ho Family Foundation the sponsor. Well-known local and overseas writers were also invited to discuss their writing experience at a number of seminars held in Hong Kong and Macau.