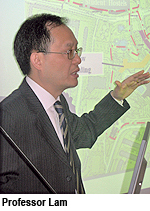 A seminar on “Higher education in the UK and Hong Kong during the economic downturn” was held at City University of Hong Kong (CityU) on 16 April, co-organised by CityU and University of Sheffield, United Kingdom.

The seminar presented major policy considerations that higher education institutions in the UK and Hong Kong will be required to consider in order to confront the current global economic downturn.

Both speakers indicated that student enrolment numbers would not be adversely affected by the economic situation but said the real challenge would be presented by fundraising and student affordability.

“In Hong Kong student numbers are set to soar with the advent of the four-year degree curriculum in 2012. We expect to be dealing with 70,000 applications a year from students, as opposed to about 30,000 at present,” said Professor Lam.

“Raising money from donations in a tough economic environment is never easy but Hong Kong does not have a tradition like that of the US, which relies heavily on this type of financial support. In Hong Kong, the government is the primary source of support for universities and at this stage they are committed to maintaining funding levels,” said Professor Lam.

In terms of student numbers, Professor Lam said that in a tough employment market, more people turned towards further education to utilise their time and bolster qualifications. But a sustained downturn could have a detrimental effect on student affordability as parents and self-funded students contend with the worsening economy.

Dr Fletcher said a similar situation existed in the UK, with tough economic times historically representing a period of high student enrolments. “In a sense UK universities have been fortunate to enjoy a golden age of funding and we have a commitment at least for the next year that our funding will continue unabated,” he said. “The real pressure at the moment is on funding opportunities beyond government circles.”

Dr Fletcher and Professor Richard Ho Yan-ki, Provost of CityU, fielded questions from the audience. Professor Ho also delivered the introductory comments at the seminar. Both universities agreed to strengthen their collaborative relationship.