The many activities arranged during the festival include lectures, a seminar on the Budget and film showings. Two lectures recently held were 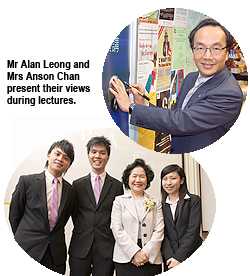 Dr Linda Li Che-lan, Associate Professor from the Department of Public and Social Administration, and Dr Fernando Cheung Chiu-hung, Lecturer from the Department of Applied Social Sciences of The Hong Kong Polytechnic University, were invited to host a seminar to discuss the government’s 2009-10 budget released in February. They discussed with students the new policies relating to local citizens, such as the internship programme for university graduates. The open exchange helped students hone their critical thinking skills. Besides the lectures and seminar, three films were shown to enliven the festival. The screening of three local and overseas films on public affairs provided an alternative channel for students to learn about administration skills. 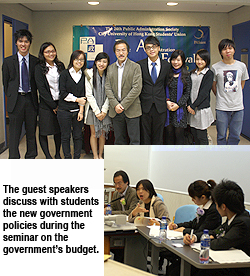 Carlton Cheung Ka-chun, Internal Secretary of the Society and Year 1 student at the Department of Public and Social Administration, said the experience of organising the festival helped him acquire the skills to arrange activities and cope with unexpected incidents. “I now understand the importance of close cooperation between team members,” said Carlton.

Zoey is also a Year 1 student at the same department. She and other committee members now promote the society’s activities to enhance student awareness of public affairs. “We visit each class in the department to promote our activities in order to arouse their interest,” said Zoey.