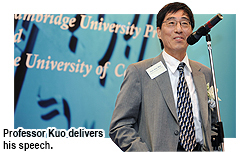 Addressing an audience of key figures in education and publishing from Hong Kong and around the world, Professor Kuo spoke of his own publishing experience with the historic publishing house. Discussing the publication through Cambridge University Press of his book Optimal Reliability Design: Fundamentals and Applications, he described their work as flawless and said they were a role model in the publishing world.

“Of the seven books I have had published, my experience with Cambridge University Press was the most impressive,” said Professor Kuo. “At CityU we appreciate the importance of their role in educating and informing generations of people from around the world, in particular their role in assisting educators in the teaching of English, which is of fundamental importance to universities in Hong Kong, and indeed around the world.”

The exhibition and a series of seminars, which featured presentations by two CityU professors, were being held at the British Council in Hong Kong from 21-27 March 2009. Professor Kuo’s book was prominently displayed at the exhibition. 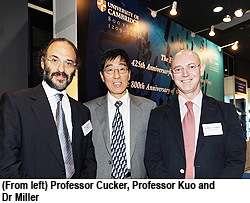 of the Department of Mathematics conducted a seminar titled “Manifold Mirrors: The Mathematics of Rule-driven Art” on 21 March. The talk, which addressed mathematics’ role in art creation, was of particular appeal to artists, academics and secondary school teachers.

The seminar by Dr Lindsay Miller, Associate Professor of the Department of English, will be held on 24 March. Titled “Individual Agency vs Social Structure: The Story of Hong Kong Students’ Attempts to Learn English”, it contends that English is an important form of cultural capital that to a certain extent determines the development of the individual, especially in a post-colonial society such as Hong Kong.

The Cambridge University Press anniversary events mark 425 years of continuous publishing and coincide with the University’s 800th anniversary. The occasion provides an opportunity for the Press and University to commemorate the books, people, ideas and achievements that have emerged from this shared history and continue to inform the world.