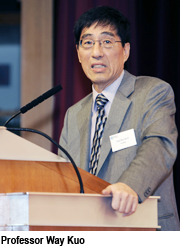 Professor Way Kuo, University President, attended the ceremony with some of the scholarship donors. Professor Kuo pointed out in his speech that the scholarships not only demonstrated CityU students’ outstanding capabilities, but was also recognition of the achievements of our students. “Without the selfless and tireless support of the donors, such wonderful scholarships and opportunities would not be possible and this further enhances the development of CityU,” said Professor Kuo.

Three of the scholarship recipients—Judy Wong Pik-yuk and Cedric Cheng Cheuk-him, Year 2 students of the School of Law, and Colin Chen Chen, Year 3 student of the Department of Accountancy, said the awards would motivate them to study hard.

Before joining the School of Law, Judy Wong had obtained an MBA degree and worked in human resources management with several large organisations. She later left work to look after her family. As her children grew, she decided parents should set a good role model for their children by demonstrating the importance of life-long learning. She studied law in order to prepare herself for work in the future.

As both a full-time student and housewife, Judy has to organise her daily schedule carefully. “I believe one must manage time efficiently so as to achieve good results. Preparation before classes and brushing up on lessons with classmates in groups can help reinforce the information taught in class. Of course, my family and classmates also gave me their full support,” said Judy. She hoped to teach her children based upon her own experience and to encourage her classmates to strive for their goals as well. 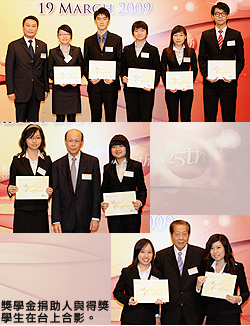 Cedric Cheng, who is also studying law, has participated in various student activities and was awarded the City University of Hong Kong Top Outstanding Student Leader Award 2008. In 2005, he graduated from the College of Business with a bachelor degree and worked in a bank for two years.

Later, Cedric realised he still had room for improvement and decided to invest his time in study to help in his career development. He took law courses, a subject he had liked since childhood, and hoped to utilise his skills to help people in need. He continued to participate in various extra-curricular activities and developed better time management to maintain his outstanding academic results. "Through participating in different extra-curricular activities, I polished my communication, organisation and management skills, which are among the essential elements for my personal growth," said Cedric.

Colin Chen has received various academic scholarships since childhood because of his excellent academic results. He said that in order to attain good academic results, students should have a good learning technique and curiosity about different matters. Colin recalled that when he first came to CityU from the mainland, he faced difficulties in adapting to the local culture, study environment and lifestyle. He was grateful that CityU organised activities to help students who faced similar problems, so that he could quickly adapt to the new environment.

However, he realised that learning Cantonese was essential for living in Hong Kong, and hence tried different ways to learn the language. “I advise students who have just arrived in Hong Kong not to avoid communicating with others because of the language barrier. The only way to learn a new language quickly is to talk and communicate more with local students, and this can help you adapt to local life,” said Colin.

The establishment of CityU scholarships is aimed at recognising outstanding achievement in academic performance, arts, sports, community service and leadership. Also, it demonstrates the recognition and support of society for the quality education advocated by CityU.