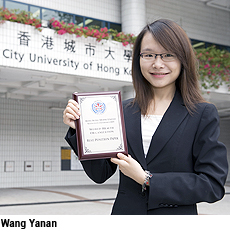 By demonstrating her grasp of world health issues, Wang Yanan, a Year 1 student of the Department of Accountancy at City University of Hong Kong (CityU), triumphed over more than 100 student delegate submissions from around the world, to win the Best Position Paper Award in an event organised by the Hong Kong Model United Nations Club.

Wang Yanan submitted two papers on water sanitation and disease control in the US respectively, the country she was nominated to represent, for entry to the club’s Hong Kong Model United Nations Conference 2009. She pointed out that diseases endangering the health of people in developing countries had to be curbed in order to accomplish the United Nation’s Millennium Development Goals. She also suggested creative ways, such as pooled financing and revolving funds, to attract funding to help developing countries address water and sanitation issues.

The papers were evaluated based on the organisation of ideas and message communicated. Her papers provided an account of the US' history in relation to the topic, how the US is affected by the issues, its political and foreign policies in this regard and her proposed resolution. 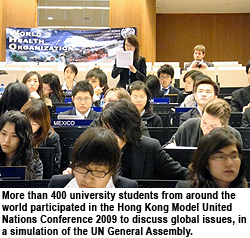 “CityU teachers always reiterate the importance of global vision. I participated in this activity in order to gain a better understanding of different national cultures through discussion of the topics at the conference,” Wang Yanan said. She also found that the critical thinking and organisational skills acquired at CityU had been helpful in analysing the data.

The club is supported by the Office of the Commissioner of the Ministry of Foreign Affairs of the People’s Republic of China in HKSAR, Constitutional and Mainland Affairs Bureau and Education Bureau of the Government of the HKSAR. The 2009 conference attracted more than 400 university students from Hong Kong, mainland China and overseas, who formed more than 50 delegations representing different countries from around the world.

Established in 2005, the club aims at raising youth awareness of global issues and instilling in them the United Nation’s peace-keeping spirit through activities that simulate the United Nation General Assembly.