By joining tens of thousands of runners taking part in the 10km, half marathon and full marathon races, 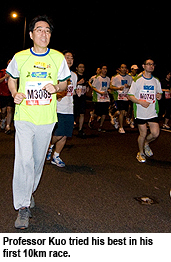 Professor Kuo said he hoped his participation could boost the morale of CityU’s delegation and encourage more people to exercise. “I’m very much honoured to be able to join the delegation and take up the role as the Head. Witnessing the overwhelming response of staff, students and alumni, I’m deeply impressed by the strong team spirit of all University members,” he said.

Professor Kuo is a sports enthusiast who enjoys playing basketball. Since arriving in Hong Kong, hiking has become another favoured exercise. Although he has never participated in a marathon, he does have experience in long-distance and cross-country running. “When I was young, I took part in a cross-country race of 100km,” he said. “Over the past few weeks, I took time to go hiking in the New Territories as preparation for the event. I believe my determined character and stamina helped me complete the 10km course.”

Professor Kuo’s leadership and participation bolstered the motivation of other CityU members to participate in the city race. Dr Muammer Ozer, Associate Professor of the Department of Management, participated for the first time in the event as a member of CityU’s delegation. Like Professor Kuo, Dr Ozer is an ardent fan of hiking. He has trekked most major trails in Hong Kong and has climbed Hua Shan Mountain in China, Mount Fuji in Japan and the Kackar Mountains in Turkey. Even as such an experienced hiker, Dr Ozer still treated the event seriously and trained frequently to prepare for his first 10km race. “Besides completing the race, as a member of the CityU Delegation I also wanted to get to know my colleagues better and make new friends,” said Dr Ozer. 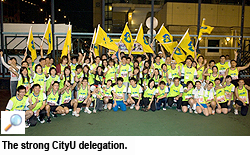 For Mr Lam Chun Yu, currently working in the telecommunications industry, this year was the first time he had participated in the Marathon as a CityU alumnus. A lover of swimming and ball games, he had practised running weekly for a few months to prepare for the Marathon. “During my study at CityU, I had the opportunity to try different activities, which gradually built up my interest in sports. As CityU is well equipped with sports facilities, I have often come back to exercise since graduation,” said Mr Lam.

Many CityU students joined the Marathon delegation with enthusiasm. Ng Man Wai, Year 1 student of the Division of Building Science and Technology, was excited to represent CityU in her first Standard Chartered Marathon race. “I like running and have practised long-distance running for three years. Although I have participated in other Marathon competitions, it was a great chance to run as a CityU representative in this Standard Chartered Marathon,” said Ng Man Wai.

The Standard Chartered Hong Kong Marathon formed part of CityU’s 25th anniversary celebrations. The number of participants was 639, exceeding the target of 625 (i.e. 252): the number 25 standing for the upcoming 25th anniversary of CityU, and 2 representing the second year of CityU taking part in the marathon. By organising a delegation to take part, the University achieved the objectives of promoting whole-person development and encouraging exercise, while fostering cohesiveness and a strong sense of team spirit within the University community.