CityU staff usher in Year of the Ox

To celebrate the arrival of the Year of the Ox, colleagues of City University of Hong Kong (CityU) enjoyed a huge new year staff party organised by the Human Resources Office on 3 February. 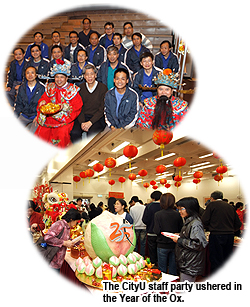 Colleagues were treated to a variety of celebratory activities. A sumptuous lunch buffet was served inside and outside the multi-purpose rooms, with stalls displaying Chinese handicrafts such as grasshoppers woven of bamboo splints and games such as lantern riddle challenge. Savouring the delicious food and enjoying the games, colleagues exchanged new-year wishes.

After lunch, the major part of the programme kicked off in the Chan Tai Ho Multi-purpose Hall. It started with videos of colleagues of various nationalities delivering new year messages in their native tongues, followed by a traditional Chinese lion dance. Then Professor Way Kuo, University President, bade a happy New Year to all colleagues. “I wish you all a life of youth and vitality, as lasting as CityU.” The atmosphere warmed up when Professor Kuo, accompanied by all department heads and other colleagues dressed as the Chinese God of Wealth, distributed red packets to party participants. 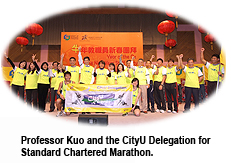 Professor Kuo also presented a flag to the CityU Delegation for Standard Chartered Marathon to wish them success in the forthcoming competition. Mrs Dorothy Davis, Associate Director of Student Development Services, announced that the number of CityU runners had already reached 639, exceeding its target of 625.

To help colleagues learn more about our new President, the party arranged for Ms Tan Shih-ying, Director of Communications and Public Relations Office, to interview Professor Kuo on the spot. The President gave a colourful account of how he had celebrated Chinese New Year since childhood in Taiwan, the US and Hong Kong, which was greeted with waves of laughter from the audience. 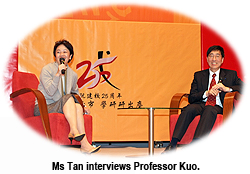 In addition to lucky draws that punctuated the event, Professor Kuo and some senior staff members were invited to sing in a mixed chorus some new year songs on stage. The party wound up with everyone in a joyous mood, signalling an auspicious beginning for all CityU staff to the Year of the Ox.