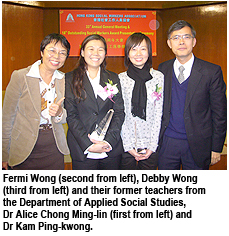 Fermi Wong, recipient of the Outstanding Social Worker Award and a graduate of CityU with a diploma and bachelor’s degree in Social Work, has served in the social work sector for 13 years. In 2001, together with her friends, she founded Hong Kong Unison, where she is currently the Campaign Director, to provide services and advocate policy reform for ethnic minority residents in Hong Kong. During the first three years of Hong Kong Unison, she served as a full-time voluntary social worker. To urge the government to amend those parts of its policies containing elements of racial discrimination, she twice made presentations with representatives of human rights organisations to the United Nation in Geneva. Subsequently, amendments to the relevant parts of the law were endorsed by the Legislative Council in July last year. Her understanding of ethnic minorities and contribution to the cause earned her appointment in 2002 as a member of the Committee on the Promotion of Racial Harmony to offer advice to the government on ethnic issues. She was also conferred a Chief Executive’s Commendation for Community Service in 2005.

“I have learned from my CityU teachers professional community work skills and a steadfast pursuance of social justice. CityU’s education has had a great impact on me, encouraging me to uphold the core values of social work despite the difficulties that may be encountered during the implementation process,” said Fermi.

Debby Wong, recipient of the Junior Social Worker Award, started her work at Caritas Hong Kong Youth and Community Service upon graduation in 2003. Her clients are those ignored by society, such as young people with drug abuse problems. In order to serve those most at risk, Debby would visit night clubs and discos twice a week to provide outreach services. Although she was rejected in the beginning, her perseverance, firm beliefs and sincerity finally won her recognition. Now those youngsters are motivated to seek health checks and have joined her rehabilitation group.

Debby said CityU’s courses made her even more determined for a career in social work. “Our teachers arranged class activities such as role-play to make us apply what we had learnt,” she said. “Besides internships, they would also encourage us to organise voluntary social services. It helped me understand that a social worker not only helps others but can also draw inspiration from those being helped.”

Both Fermi and Debby used to be students of Dr Kam Ping-kwong, Associate Professor at the Department of Applied Social Studies. Dr Kam was glad to see them score great achievements in the social work sector and make contributions to society. “As I see it, outstanding social workers don’t have to accomplish grand projects, but they must have the courage to take up challenges as well as commitment to helping the underprivileged. Fermi and Debby have both done well,” said Dr Kam.