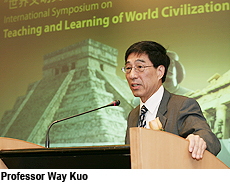 An International Symposium on Teaching and Learning of World Civilisation was held by the Department of Chinese, Translation and Linguistics of the City University of Hong Kong (CityU) on 10-11 January 2009 to explore ways of teaching about world civilisations of the 21st century in the context of Hong Kong, mainland China, Taiwan and Asia as a whole.

As part of the new four-year curriculum, CityU is planning a General Education course on world civilisation. In light of rising global interconnectivity, students must acquire a broad knowledge base in order to face the challenges ahead. Through this new course, it is hoped students learn about different people and cultures, become scientifically and culturally literate and acquire the attributes of active, responsible citizens.

“We believe the best ways to nurture quality students capable of independent thinking is to develop General Education. Propelled by globalisation, the frequency and intensity of interactions between countries is growing exponentially. In light of this new paradigm, we must possess a fundamental understanding of the civilisations of nations around the world,” said Professor Way Kuo, President of CityU, at the seminar’s opening ceremony. 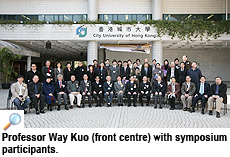 “Tertiary education students in the 21st century must have a fundamental understanding of world civilisations and this is the reason we organise this symposium,” Professor Kuo added.

This year, in order to develop the contents of the new course, CityU has invited the world’s top experts from across the straits, including academics from National Taiwan University, Fudan University, Peking University and others to explore the difficulties and challenges presented by General Education on world civilisations in the Chinese context.

According to Chair Professor Zhang Longxi of the Department of Chinese, Translation and Linguistics, CityU’s General Education course on world civilisation is unique, as it has combined the experience and wisdom of many scholars from various parts of the world. Its contribution in nurturing global-minded students will be significant, he said. Professor Zhang and other speakers will be sharing their valuable experience on designing and teaching world civilisation courses during the two-day symposium.