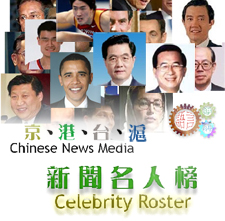 The rosters consist of regional rankings of celebrities who gained massive media exposure in Beijing, Hong Kong, Shanghai, and Taipei respectively, in addition to a Pan-Chinese ranking that encompasses Beijing, Hong Kong and Taipei. The results are based on the accumulative statistics from the bi-weekly rosters compiled and published throughout 2008.

“The celebrity rosters this year feature the highs of the US presidential election and the lows of the Chen Shui-bian corruption case among many other global events,” said Professor Benjamin T’sou Ka-yin, Director of LISRC. 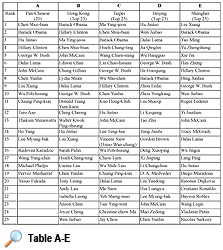 Thanks to the US presidential election, Barack Obama, Hillary Clinton and John McCain have come to the front stage. So has Chen Shui-bian, who has been cutting a striking figure in money laundering overseas. Other political figures, like Chiang Ping-kun, chairman of Taiwan’s Straits Exchange Foundation, Chen Yunlin, chairman of China’s Association for Relations Across the Taiwan Strait and Dalai Lama, also appear on the roster because of various political events.

Remarkable changes have taken place in sports figures’ rankings. After retaining a place on the roster for seven consecutive years, Yao Ming failed at his 8th attempt and is now replaced by Liu Xiang and Michael Phelps from the US. Meanwhile, author Bo Yang and founder of the Formosa Plastic Group Wang Yung-ching from the cultural and economic fields respectively have each entered the list. What is noteworthy is that, among the 20 top names, five come from America, five from Taipei, four from the mainland, but none from Hong Kong.

As in the past, different numbers of celebrities are found in individual regional rosters (columns B to E), with Shanghai featuring the highest. The Shenzhou VII astronaut trio appears on the rosters in Hong Kong, Beijing and Shanghai though outside the top-25 group, but is missing from the Taipei list. The ratio of local and non-local celebrities on the individual rosters is also remarkable. On the Hong Kong roster, showbiz celebrities account for 32% of the total, with artistes like Edison Chan, Gillian Chung and Lydia Shum getting even higher media exposure than the Chief Executive Donald Tsang Yam-kuen.

This year, LISRC has added a new feature to the rosters by releasing its analysis of accumulative positive and negative sentiments associated with various names across the Chinese communities of Beijing, Hong Kong and Taipei. Such analysis about the 2008 US presidential election is shown in the table below, with 10 representing the most positive and -10 the most negative sentiments associated with each candidate:

Compared with the 2004 US presidential election when Kerry received more positive reporting across the several Chinese communities than Bush did, this year’s analysis shows no unanimous likes or dislikes for the same candidate in Beijing, Hong Kong and Taipei, except that McCain’s scores have remained negative in the three regions all along.

Find full details of the annual rosters at http://www.livac.org/celebrity/.