The Court briefed on new measures for strategic development

The Court was briefed on new strategic development measures adopted by University management focusing on organisational restructuring, at its second meeting on 11 December.

The meeting was presided over by Dr Norman Leung Nai-pang, Pro-Chancellor of CityU, who extended his warm welcome on behalf of the Court to Professor Way Kuo, University President, and Mr Leung Chun-ying, the new Council Chairman. 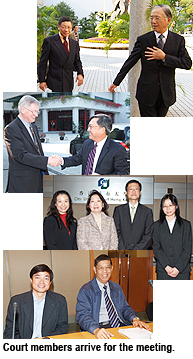 "CityU has many things to celebrate since last year's initial meeting, including the assumption of duties of the President and Council Chairman," said Dr Leung. He went on to express his satisfaction at having recruited Professor Kuo as the President and complimented the Council Chairman for his significant contribution to Hong Kong, the country and, in particular, Hong Kong's tertiary education.

The Court is one of the three statutory bodies, together with the Council and the Senate, established under the CityU Ordinance, responsible for providing advice and support on the general policies and work of the University.

Dr Leung believed that with the Council Chairman's guidance, CityU would benefit from the President's capable leadership in planning and executing the long-term strategic development of the University. "I'm confident CityU will achieve even greater things in the near future," said Dr Leung.

In his report to the Court, Professor Kuo extended his thanks to faculty and staff for their support over the last seven months and to the students for sharing their visions and aspirations for the University. 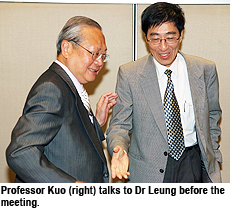 Professor Kuo reflected upon how CityU has firmly established itself as a world-class university providing quality education and emphasised the importance of enhancing the image of the University. "University rankings are like the Hang Seng Index; students look at rankings to choose which university they want to go; recruiters look at rankings to decide what kind of graduates to recruit; and some companies tabulate salary levels on the basis of the rankings of a university," said Professor Kuo.

Professor Kuo reported that the University was in the middle of preparing the five-year strategic plan and assured the Court the new organisation chart would equip the University to meet new challenges. Among the major objectives are to meet the challenge of the three- to four-year transition of undergraduate curriculum structure and to empower the faculty and academic leaders at different levels to contribute fully to the University.

A clear line of leadership and accountability, according to Professor Kuo, will complement empowerment. The new organisation structure, with proper delegation and responsibility, will ensure CityU is best placed to achieve further growth.

Regarding campus development, Professor Kuo said there were four major capital projects underway, namely the CCCU Building and the Multi-media Building, which are currently under construction, as well as the Student Residence Phase IV and the Academic and Administration Building, which are in the planning stage.

In his report as Council Chairman, Mr Leung Chun-ying expressed his wish to explore the huge potential of CityU. Though only in his second month, Mr Leung said he had undergone a "crash-course" meeting faculty, student and alumni representatives and members of the Staff Association, talking to the newly-recruited Director of the Communications Office, visiting some of the University facilities and even trying the food at the Canteen on two Saturdays.

All of these, Mr Leung said, gave him a better understanding of the University. He reiterated his intention to work together with CityU colleagues to realise the opportunities awaiting the University. He said he would share with the Court the work done by the Council as regularly as possible. 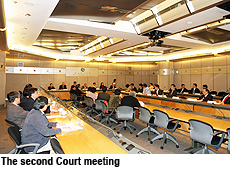 Mr Leung divided the issues facing the University into two major categories: the internal legacy issues and the external environment. He would work with colleagues to resolve these issues.

Mr Leung also addressed the issue of the proposed remuneration package, intended to ensure the University can recruit and reward the best qualified faculty and staff. "None of these issues," Mr Leung said, "can be solved individually. We need to work as a team." He encouraged colleagues to demonstrate team spirit and to work together for the common good of the University and Hong Kong society at large.