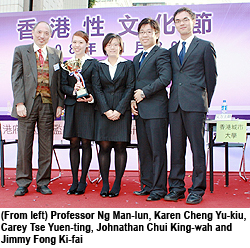 CityU stood for the negative side of the statement, "The Government should censor the pornographic materials on the Internet," with Professor Ng Man-lun and Dr Tung Cheung Yee-lai, Council members of The Family Planning Association of Hong Kong and Dr Tse Lin-chugn, a legal expert, serving as adjudicators. CityU employed quick wit, sound knowledge and technical skill to defeat The Chinese University of Hong Kong (CUHK) and took the champion’s crown.

Adding to the credibility of the victory was the fact the competition was held at the end of semester when the team members were busy with examinations and preparing their thesis and reports. "The competition was a lesson in the importance of time management -- how to steal time from our tight schedule to prepare for the competition," said Jimmy, who was concluding speaker and Chairman of the CityU Chinese Debating Team.

"The competition was held at the Chater Road Pedestrian Precinct in Central, which is a public area. We had to stay calm and perform well in front of large crowds of people. This experience helped to build up our self-confidence," Jimmy added. Carey, the team’s opening speaker, agreed and added that contesting in a public space served to sharpen their debating skills. 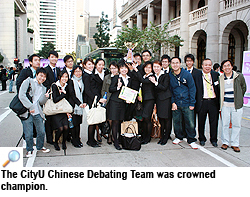 CityU encourages students to take the initiative in learning as independent knowledge explorers. Karen, the captain, and Johnathan, the second speaker, said the team had really explored new areas as they researched their subject matter. "To prepare for the contest, we needed to have a certain level of computing knowledge, which is not my strength. To compensate, I searched for any related information I could find to better equip myself," said Karen. To help formulate the team's argument, Johnathan personally tested numerous network filtering software products.

The "Famplus2 Cup・Inter-U Debate Competition 2008" was organised by The Family Planning Association of Hong Kong and was part of The Hong Kong-Macau Sex Cultural Festival 2008 organised by the Hong Kong Sex Education Association. The objective of the Festival is to provide a platform for youngsters to discuss sex-related topics in an open and rational manner. The first round of the debate competition was held in early November. The first session debate was on the statement "The Government should legalise homosexual marriage" and was contested between CUHK and The Hong Kong Institute of Education. The second session’s subject was "The Government should release sex crime offender lists to the general public," contested between CityU and The Hong Kong Polytechnic University. CityU and CUHK won their respective events before competing in the final.