City University of Hong Kong (CityU) has joined forces with the prestigious Chinese Academy of Sciences (CAS) to set up a joint laboratory through its affiliate, the Institute of Atmospheric Physics (IAP), to conduct atmospheric research that will have far-reaching effects on understanding climate change, especially in southern China and the Pearl River Delta region.

By combining the existing research capabilities of CityU and IAP, the joint laboratory will engage in a comprehensive study of the overall climatic changes taking place in China and the wider Asia Pacific region.

The collaboration marks a significant recognition by CAS of CityU’s competitive edge in both basic and applied sciences and only came to fruition after CAS assessed the research capabilities of 21 other established and prospective joint laboratories. To date, CAS has established 13 recognised joint laboratories in conjunction with Hong Kong institutions and organisations, two of which are with CityU. 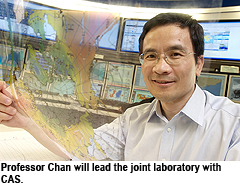 Leading the laboratory will be Professor (Chair) Johnny Chan Chung-leung of the Guy Carpenter Asia-Pacific Climate Impact Centre and the Laboratory for Atmospheric Research of the Department of Physics and Materials Science at CityU. “CAS has a very strong foundation in scientific research, so the joint laboratory will not only focus on basic science but also on its application, which represents an extra dimension to climatic research in the region,” said Professor Chan.

The team will also comprise academicians from both the department and CAS. The collaboration will allow the exchange of research personnel to work on specific projects, which will serve to upgrade the research standards of academics on both sides and also greatly benefit CityU students.

CityU is already a pioneer in the research of typhoons and monsoons in the Asia-Pacific region through its Guy Carpenter Asia-Pacific Climate Impact Centre, launched earlier this year.

The focus of the latest joint research laboratory has huge implications for the region. One of the main areas of study will be possible droughts in the South China region, which has severe implications on the salination of natural underground aquifers and their vital fresh water reserves. Changes in winter monsoon patterns can lead to rainfall reductions, causing underground water levels to fall and seawater to flow inland as a result. Salt contamination of underground water can have serious consequences for the supply of fresh water for consumption.

By identifying the possible major cause of extreme climatic changes, the joint laboratory will be able to assist regional governments with water resource management, a matter of strategic importance from both a social and national security perspective. In addition, it is expected that the joint laboratory and the Hong Kong Observatory could serve a complementary role in furthering weather forecasting research in Hong Kong and the region.