Results of the 2007/8 Hong Kong Sustainable Development Index Survey (HKSDI Survey) produced by City University of Hong Kong (CityU) in conjunction with the Canadian Chamber of Commerce in Hong Kong were released on 20 November. HKSDI_chart08_e_L.jpg

The findings of the survey reveal that environmental protection ranks alongside the education system as Hong Kong's top sustainable development priority. Among the issues of top concern are clean air, quality of teaching and the related issue of student-teacher ratio.

Launched in 2003, the Hong Kong Sustainable Development Index measures progress on 10 key economic, environmental and social priorities that have been identified as important for furthering the territory’s sustainable development.

For 2007/8, the Index rose to a new high of 103.6, compared to 102.6 in 2006 and a baseline of 100 in 2003. The survey results indicate that the general public sees some overall progress being made toward Hong Kong's sustainable development goals. 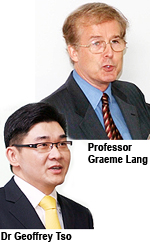 While the education system has been identified as a top priority in every HKSDI Survey since 2003, the importance placed by the public on environmental protection rose significantly in 2007/8 to rank alongside the education system as a top priority. However, its performance rating fell from fourth in 2003 to ninth in 2007/8, resulting in the largest “satisfaction gap” among the sustainable development priorities tracked by the HKSDI Survey. (Click here for key findings )

“The satisfaction gap in nine of the 10 priorities decreased in 2007/8, resulting in an overall increase in the HKSDI,” explained Professor Graeme Lang, convener of the Canadian Chamber of Commerce’s Sustainable Development Index sub-committee and Head of CityU’s Department of Asian and International Studies. The Index is, however, anticipated to decrease as a result of the deteriorating economy. 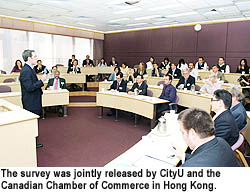 “Pursuing a sustainable quality of life should be the central objective of every society, but it is difficult to get a clear picture of where improvement is needed most unless you measure public perception of the issues,” said Dr Geoffrey Tso Kwok-fai, Associate Professor, Department of Management Sciences of CityU. “Our survey is unique in providing a large-scale measure of public perception of the top priorities for sustainable development in Asia's world city. We randomly selected more than 2,000 Cantonese-speaking adults - forming a representative sample of the Hong Kong community - and interviewed them each for at least 20 minutes to generate this year's findings.”

“These results enable us to assess the importance the community attaches to multiple facets of sustainable development and to track perceived progress in managing these areas, especially when viewed as a five-year series,” said Professor Lang.