Professor Lee Shuit-tong, Chair Professor of the Department of Physics and Materials Science at City University of Hong Kong (CityU), has been awarded the Prize for Scientific and Technological Progress of Ho Leung Ho Lee Foundation in recognition of his outstanding achievements in science and technology and his contribution to promoting development in these areas on the mainland. 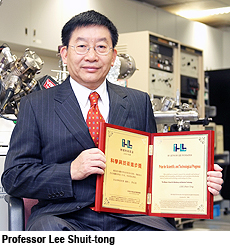 Professor Lee won the Metallurgy and Materials Technology award in the Scientific and Technological Progress Prizes and with it a cash award of HK$200,000. The award was in honour of his research into super-diamond and related materials, nanomaterials, organic light emitting diodes (OLED) and display technology. The award illustrates CityU's excellent academic and outstanding science and technology achievements.

"This shows the state's support and affirmation of science and technology," said Professor Lee, who also added that he was grateful to the University for providing an excellent research environment complete with many outstanding researchers. Also, he thanked the support and assistance offered by the management, colleagues and students that made it possible for him to receive the honour. "The award should not belong only to me, but to the University, my department and research centre," said Professor Lee.

Since joining CityU 14 years ago, Professor Lee has been dedicated to materials science research and has successfully developed various innovative and energy-saving technologies, such as nanotechnology, nanodiamond and OLED.

Professor Lee pointed out that OLED technology represents a revolution for display devices, which can significantly save energy and show bright, sharp colours. It can also be used in extremely thin organic film to produce display monitors. The technology is now well developed and it is expected that by using this technology, higher-quality display monitors can be introduced to the market in just a few years. 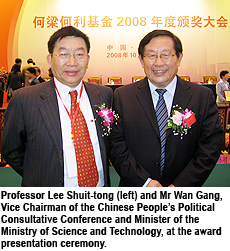 Professor Lee was pleased to receive the award but is more concerned about the contribution of science and technology to society. In the future, he will focus on the application of nanomaterials and technologies to the disciplines of biomedical and energy regeneration, with the objective of addressing energy shortages.

The HLHL Foundation was set up in 1994 by four well-known Hong Kong philanthropists, namely Dr S H Ho, Dr Leung Kau-kui, Dr Ho Tim and Dr Lee Quo-wei, who donated HK$100 million each. It aims to promote the development of science and technology on the mainland by awarding outstanding scientists. The HLHL Foundation Prizes are currently the most significant and influential award in mainland China.