The School of Law (SLW) of City University of Hong Kong (CityU) hosted the conference “Constitutionalism in China in the past 100 years and its future” from 17 to 18October 2008. Professor Han Dayuan, Chairman of the Chinese Constitutional Association, China, along with other renowned scholars and professional legal practitioners from mainland

China, constitution_L.jpg Taiwan, UK, USA, Japan, Singapore, Australia and Hong Kong shared their views on the Constitution Act of China and on the differences between the constitutional government of China and those of other socialist countries. 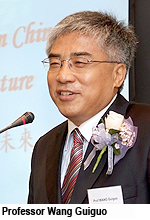 “The 100th anniversary of constitutionalism in China has profound implications,” said Professor Wang Guiguo, Dean of SLW. “The review and analysis of the background of the Constitution Act in China could provide insights to scholars who focus on research of the act. It is an honour for SLW to organise this conference and act as a bridge between the legal practitioners of mainland China and Hong Kong.”

Professor Han expressed gratitude to CityU for organising the conference and giving scholars and experts a chance to meet and further discuss this issue. He added that this year marked the 30th anniversary of the reform and opening-up of the mainland while, at the same time, the motherland has experienced several significant events such as natural disasters and the Olympic Games. At this historic juncture, a review of the development of constitutionalism in China in the past century and its prospects was particularly meaningful to legal scholars, he said. 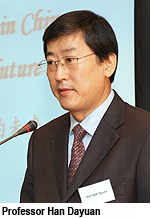 Professor Zhou Tianyong from Zhongyang Dangxiao, Mr Lo Pui-yin, Barrister, representative of the Hong Kong Bar Association, Professor Su Yeong-chin from the College of Law of National Chengchi University of Taiwan, and Professor Albert Chen Hung-yee from the Faculty of Law of the University of Hong Kong, also attended the conference and made comments.