In a bid to bolster communication with students and further understand their needs, Professor Way Kuo, President of City University of Hong Kong (CityU), had a lunch meeting with the Students’ Union Executive Committee on 14 July. 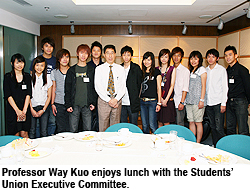 Members of the Executive Committee felt honoured and excited to meet the President personally. “Professor Kuo would like to have more contact with students, and he promised to not only attend the coming orientation camp but also serve as a judge during our activities,” said Andy Chu Ka-kit, President of the Students’ Union. In addition, Professor Kuo accepted an invitation to be interviewed by the magazine published by the Students’ Union Executive Committee (城訊), to expand upon his philosophy for managing the University.

The lunch with the President was particularly timely for Sandy So Yik-la, Students’ Union Publication Secretary. As a BBA (Hons) student in Global Business Systems Management, Sandy is required to participate in an exchange programme studying at a mainland university for one semester. Minutes before meeting Professor Kuo, Sandy had been notified that the campus nominated to her was Xi'an Jiaotong University. Knowing nothing about the institution, she harboured some concerns about the upcoming journey.

“I attended the lunch feeling anxious,” she said. “Thankfully, Professor Kuo told me during the lunch he had just come back from Xi'an Jiaotong University. He highlighted to me the special features and advantages of the university, which eased all my worries and even enabled me to start looking forward to the trip.”

Professor Kuo not only talked to students about academic topics such as student activities and exchange programmes, but also chatted with them about daily matters such as his favourite foods.

“We were pleased to learn that Professor Kuo has already adapted to his life in Hong Kong and that he likes local food very much, including those roadside food stalls,” said William So Kam-fai, Students’ Union Sports Secretary.

“Professor Kuo said he wished to make CityU a top globalised university. We promised we would try our best to help him achieve this goal,” William added.

All executive committee members expressed their gratitude to Professor Kuo for finding time in his tight schedule to have lunch with them and said they would welcome the opportunity to meet Professor Kuo again.