Around 60 graduates of the School of Creative Media (SCM) at City University of Hong Kong (CityU) displayed 56 photography and multimedia works in the exhibition titled "Medialogue 2008: Upsilon", running from 24 June to 29 June .

Upsilon, this year's exhibition theme, derives from the Greek capital letter Y and refers to the realm of spatial dimensions, where a "moving upsilon" signifies ascension from a lower dimension to a higher one.

The word has two connotations for "Medialogue 2008: Upsilon". The move from a lower dimension to a higher one can be likened to the creative process in both its groundbreaking and mind-expanding processes. The other connotation has parallels with CityU's educational goal of transforming students to professionals. The exhibition will mark the point at which students shrug off the mantle of students and announce themselves as professionals. 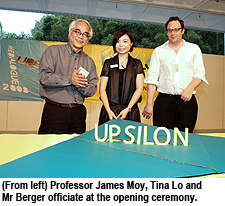 "The exhibition is the culmination of the hard work of our students. Their future in the multimedia field represents the birth of a new era," said Professor Moy in his welcoming remarks. He also thanked the advisors for helping graduate students bring their projects to fruition. Mr Berger was impressed by the students' works and hoped they would continue to create fascinating projects for years to come.

Tina Lo said that as an annual student-initiated and student-oriented exhibition, "Medialogue" represented a chance to showcase their work, through which they could also pay tribute to their school and teachers. 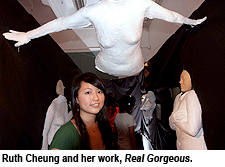 Photography, computational interactive media work, multimedia installations, live dance performance in collaboration with interactive media, and numerous other media forms made up the exhibition. There are also several screenings showing a range of videos and short films. Several experienced filmmakers and artists will be guests at the Director's Forum and Exhibition Forum, which provide a platform for the audience and guests to exchange ideas and discuss each unique art piece. 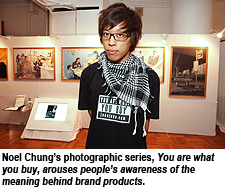 Ruth Cheung Ting-ting, one of the participating students, created Real Gorgeous, an installation highlighting the prevalence of female dissatisfaction towards their bodies. "Real Gorgeous is an art piece about the exploration and admiration of women’s bodies,” said Ruth. Six women who took part by having their bodies moulded and sculpted life-size then took part in discussions and shared stories about their bodies and body image. “I hope this project can help the audience project a new and positive sense of their own bodies,” she said.

Noel Jones Chung Chi-wah’s photographic collection, You are what you buy, is a series highlighting the irony of people succumbing to commodity fetishism. “In this era, it is not surprising that everybody has at least one famous-brand commodity in their home. But how many people are aware of the message behind the label? I want to make people pay more attention to this issue,” he said. 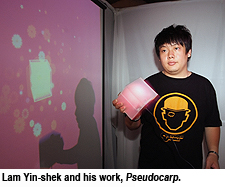 Lam Yin-shek’s Pseudocarp is a large cubic installation in which players can alter image colour and pattern by controlling a small cube. The imagery and sounds have a psychedelic feel that varies according to the user’s input. Lam said he wanted to show that people actually live in a big cube within a space dimension.