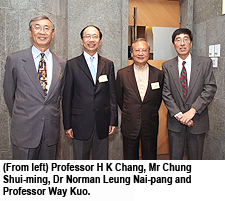 The Cultural and Sports Committee of City University of Hong Kong (CityU) held the last City Cultural Salon of this academic year on 24 June. Guest speaker Professor H K Chang, former President of CityU, delivered a speech on the topic, “Nylonkong: A Tale of Three Cities”.

Professor Cheng Pei-kai, Chairman of the Cultural and Sports Committee and Director of the Chinese Civilisation Centre, said it was an honour to have Professor Chang back at the University for the City Cultural Salon. 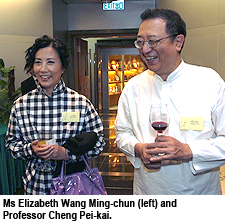 Professor Chang said he treasured fond memories of his years at CityU and expressed his gratitude to Dr Leung and Mr Chung, the two Council Chairmen during his tenure as president, for their support.

Professor Chang discussed the challenges facing Hong Kong in relation to a recent feature story in international news magazine Time, that coined the term Nylonkong, to mean New York-London-Hong Kong. The article published early this year illustrated that these three cities, which shared similar cultural characteristics and economic growth rates, had come to typify globalisation and the development of metropolitan cities. 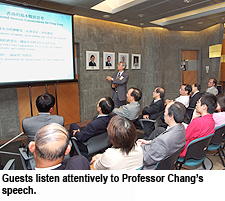 Professor Chang said Hong Kong’s evolution into a major financial hub was similar to that of New York and London but that there were differences in the style and form of this development. “The old song Below the Lion Rock (espousing the virtues of Hong Kong people and their work ethic) represents the essence of Hong Kong - the roots of the culture are different from New York and London. But Hong Kong lacks talent in strategic and creative thinking and we need to nurture more people with these strengths,” Professor Chang said.

“The cultural development of Hong Kong should be a composite of both eastern and western culture so that it can properly reflect Hong Kong’s image as a cultural melting pot,” he added.