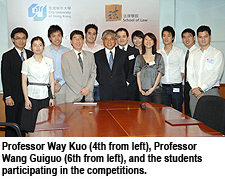 Professor Kuo was delighted to see the hard work of the students earning international praise. “Their awards in such tough competition obviously bring personal satisfaction, but their attainments also cast a positive light on CityU as a university of world standing.”

Professor Wang was also appreciative of the students’ achievements. “The awards our students received in the various competitions reflect their excellence. I wish them even greater success in the future and hope and trust they will devote what they have learned to the betterment of society,” he said.

The annual Philip C. Jessup International Law Moot Court Competition is known as the world’s most prestigious international simulated court proceeding competition. Students from all over the world participate in the competition, in which they are required to research point

s of public international law and demonstrate their advocacy skills before a panel of experienced judges. Jeffrey Gabriel Yu Sichon, a SLW Juris Doctor student, won second prize for Best Oralist in an intense competition. Though he spent a great deal of time preparing for the competition, he said it was wholly justified by the confidence he had gained in public speaking.

The Red Cross International Humanitarian Law Moot was the first such international competition staged in the Asia-Pacific region. It aims to raise awareness of international humanitarian issues among law students through the examination and debate of wider social issues. The team of Barbara Kwok Hei-yin, Tammy Liao Kit-ying and Man Ho-yin said that at SLW they had acquired the communication skills and research methods that led to their success.

The Willem C. Vis International Commercial Arbitration Moot originated in Vienna and is today the largest international arbitration competition on international trade law. The goal of the competition is to train law students on the application of international commercial law and arbitration. Participating students were required to debate at least four times in front of internationally-renowned arbitrators. So Wing won an Honourable Mention for Best Individual Oralist. “My debating technique improved markedly. The training at SLW showed me that law is not only a set of theories and rules but a tool that can be used to serve the community,” he said.

The Willem C. Vis (East) International Commercial Arbitration Moot took place in Hong Kong. The competition offers law students a unique educational experience and is helping to develop a culture of international arbitration in the Asian region. Juno Pang Kit-lai received an Honourable Mention for Best Oral Advocate. “Participation in the competition gave me a chance to broaden my horizons by getting in touch with law professionals and students from different countries,” she said.