CityU students take home about half of the City Literary Awards

The prize presentation ceremony for the third City Literary Awards writing competition, hosted by City University of Hong Kong (CityU), was held on 17 May (Saturday). Demonstrating their outstanding writing skills, CityU students claimed seven of the 16 prizes on offer in three categories at the third City Literary Awards. The result is a reflection of CityU students’ language proficiency and sound understanding of literature.

The theme of the writing competition was City Movement. Entries were accepted from December 2007 onwards, with the competition generating an overwhelming response 77% above the previous year. The ratio of 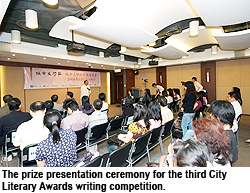 entries between Hong Kong and Macau was 72% and 28% respectively. CityU students won the champion, runner-up and merit award in the prose category; the champion and third prize in the poetry category; and the third prize and merit award in the short story category. The rest of the winning entries were contributed by writers from other Hong Kong and Macau tertiary institutions and secondary schools.

Lin Gongcheng and Shen Yi of CityU and Qian Yunzhi of Hong Kong Polytechnic University won the prose, poetry and short story sections respectively. All winning entries will be published later this year in the third issue of City Literature. 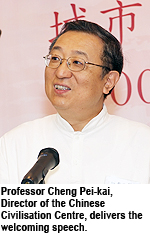 “The response to the competition was very encouraging. I would like to thank all the prominent writers for their continuous support, and especially the generous support of the Hong Kong Arts Development Council, Macao Foundation and the Robert H. N. Ho Family Foundation. We will try our best to cultivate an environment to nurture young writers,” Professor Cheng Pei-kai, Director of the Chinese Civilisation Centre, said in his speech.

Robert H. N. Ho Family Foundation consultant
Mr Shiu Lo-sin said, “CityU organised the City Literary Awards writing competition, which not only encourages youngsters to participate in creative writing but also provides an opportunity for them to publish their work.” He also said all winning entries would be published in a book.

Lin Gongcheng, a Doctor of Philosophy candidate of the Department of English and Communication at CityU, won the prose category with City Movement— A diary in Venice. “City Movement can be regarded as the development of a city. When a person lives in a city, his attitude in dealing with the history and reminiscences of the past, is also a crucial part of the movement of the city,” Lin Gongcheng said. 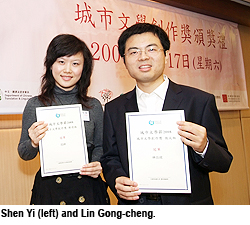 Shen Yi, a Year 1 student in the Master of Arts in Media Cultures programme at CityU’s School of Creative Media, won the poetry category with City Diary—A Group. It comprised four poems that expressed the feelings of people living in a city. She started creative writing in primary school and has previously won essay competitions. This was the first time she had written poems. She enjoyed the freedom in creating contemporary poems. “Poetry is similar to a montage of words. The people and daily routines you encounter may become the source of the poems,” Shen Yi said. 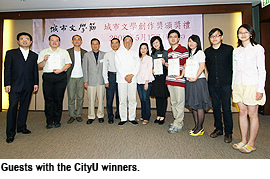 The City Literary Awards is part of the City Literary Festival, the theme of which is “City Movement”. It is organised by the Cultural and Sports Committee, Chinese Civilisation Centre and CityU’s Department of Chinese, Translation and Linguistics. The Hong Kong Arts Development Council and Macao Foundation are co-organisers and the Robert H. N. Ho Family Foundation the sponsor. Well-known local and overseas writers were also invited to discuss and showcase their writing experience at a number of seminars in Hong Kong and Macau.