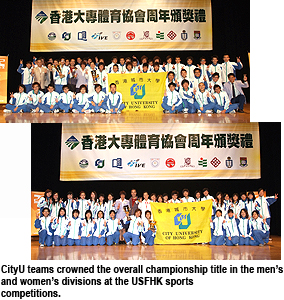 CityU teams dominated the 2007-08 sports competitions organised by the University Sports Federation of Hong Kong, China (USFHK), claiming the overall championship title in both the men’s and women’s divisions. Of the 11 members of USFHK, CityU is the only higher education institution to have won these titles in the same year. It marks the third time CityU has won these two titles. In addition, Ricco Chan Ye-ko, first year student from the Division of Commerce in the Community College, and Wind Chan Ho-yee, a Year 1 student of CityU’s Department of Management, were elected the Sportsman and Sportswoman of the Year respectively. These sporting achievements once again demonstrate CityU’s commitment to developing students’ full potential.

The CityU Sports Annual Prize Presentation Ceremony, organised by Student Development Services, was held on 25 April at the Wei Hing Theatre. After CityU students delivered an energetic Taekwondo performance and a piano solo, awards were presented for best academic performance, best coach and trainer, most valuable athlete, most enthusiastic athlete and most improved.

The awards were presented by 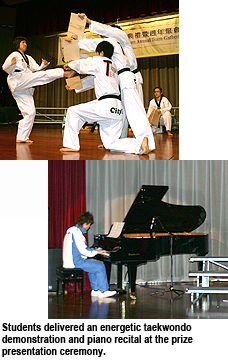 Under the motto “Be the best that we can be”, CityU sports teams encourage students to play to their full potential. Professor Ho congratulated the teams for achieving outstanding results. He encouraged students to develop team spirit and self-confidence through sports training, which could also be reflected in improved academic performances as well. 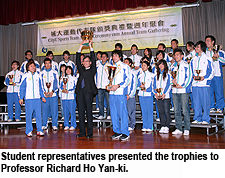 “To be a person with self-confidence, you should not be conceited nor feel inferior to others. When students graduate, they may not ultimately become an athlete. However, through the training process, students can find their own sense of value. I am sure students who have attained these achievements and the subsequent self-confidence, will have a bright future,” Professor Ho said.

Professor Vrijmoed congratulated the athletes on achieving such impressive results.

“CityU’s sports teams achieve outstanding results each year thanks to their excellent team spirit and consistency when faced with a challenge. Apart from setting up their outcome-based objectives, the athletes also conduct a self-evaluation so as to improve further. With an arduous training regimen and the full support of all CityU staff and students, they attain excellent results. I believe they will continue to work hard to achieve their goals,” Professor Vrijmoed said. 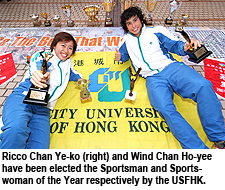 Wind Chan Ho-yee was admitted to CityU through the Student Athletes Admission Scheme last year. Coupled with her good academic results, she was named one of the winners of the Faculty of Business Sports Awards. Being one of the core members of the women’s Athletic Team, she won four gold medals in the short-distance running events and was elected Sportswoman of the Year. She said the support of her coach and other staff and students was instrumental in her achieving such rewarding results.

“I am very happy and honoured to represent CityU in competing for this award. After winning the award, I will continue to try my best to train hard and improve my skills, so that I can make a contribution to both CityU and Hong Kong,” Wind Chan said. 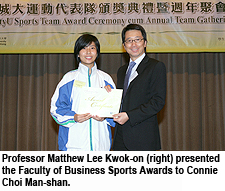 Connie Choi Man-shan, a Year 3 student of the Department of Marketing, helped the squash team to win the championship in the women’s division. Though she has a hectic training schedule, she still achieved good academic results. She was awarded the CityU Alumni Association Sports Awards, The Faculty of Business Sports Awards and the best academic performance award. Connie believed that good time management skills were the key to success. “I believe we need to concentrate on everything we do. My classmates understand my situation and have provided assistance. Besides, I will stop all the training when I have to prepare for examinations,” she said.

Ng Mo-yiu, a Year 3 Department of Building and Construction student, was awarded the Most Valuable Player Award in the Women’s Woodball competition, won by CityU. She said the team had recruited some new members and started training last summer to develop their teamwork and understanding. She said intensive training was the key to success.