Professor (Chair) Leung Kwok, Head of the Department of Management, and Professor Zhou Nan, Head of the Department of Marketing at City University of Hong Kong (CityU), received international and national awards respectively for their academic achievements. The honours offer noteworthy recognition of CityU’s reputation for academic excellence, both in China and overseas.

Professor Leung was elected as Fellow of the Academy of International Business (AIB) for his contribution to international business studies, while Professor Zhou Nan was granted a Cheung Kong Chair Professorship under the Cheung Kong Scholars Programme 2007. 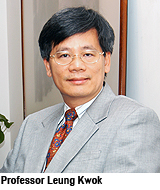 Professor Leung is the first scholar from the Greater China region to be elected as an AIB fellow. There are around 80 AIB fellows worldwide and only three in Asia. AIB was established in 1959 and now has more than 3,000 members in 71 countries. The academy is the leading association of scholars and specialists in the field of international business. Fellowship status is only offered to scholars who have made major contributions to international business studies. The academy has set a very high standard for this honour. The fellowship is limited to a maximum of five scholars per year.

Professor Leung joined the academy as a member in 2002. He was then invited to be the Deputy Editor-in-Chief of the Journal of International Business Studies, the academy’s publication and a leading international business studies periodical that accepts only the very highest quality papers. Professor Leung is responsible for reviewing all submitted papers.

Professor Leung also helped the academy organise the 2006 Frontiers Conference in San Diego. The conference assembled academics from around the world to discuss emerging research frontiers in international business. Professor Leung has also led the Paper Development Workshop that offers suggestions to scholars on ways to improve their research papers.

Given his relatively short tenure as a member of the academy, Professor Leung was particularly delighted that his research was being recognised by such an elite organisation. He said that working in the academy had helped his research on multinational operations.

Professor Leung will take up an advisory role in the academy and will be responsible for providing advice on international business research and development. Professor Leung is now a member of the Consulting Editors Board of the journal.

Professor Leung believes the fellowship is an encouragement to his academic department, CityU and Hong Kong. “Hong Kong is one of the centres of international business activity. It is also the bridge between the mainland and overseas markets. Any research or studies on international business and multinational operations are especially important to Hong Kong and the mainland,” Professor Leung said. 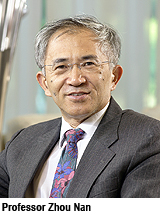 Professor Zhou Nan will visit Wuhan University soon to contribute his expertise to the field of enterprise management. The Cheung Kong Scholars Programme was established by the Ministry of Education and Li Ka Shing Foundation in 1998 to further improve China’s educational standards and competitiveness through the training of the country’s best and brightest young minds.

Professor Zhou said he was honoured to receive the professorship. He would like to make use of his 20 years of marketing research and teaching experience to act as the bridge between Hong Kong and mainland academics. He also wishes to nurture young marketing scholars in the mainland and enhance the standard of scholarship. In the past few years, Professor Zhou organised exchange tours to mainland institutions and participated in a number of mainland marketing conferences with other marketing professors and students.

Professor Zhou is working closely with a number of mainland institutions to promote marketing scholarships in China. In 2003 and 2004, Professor Zhou’s research was the only sponsored project under the managerial science category in the Joint Research Scheme of the National Natural Science Foundation of China and the University Grants Committee.

In 2005, Professor Zhou helped produce the Journal of Marketing Science, a new marketing periodical in China. The journal provides a platform for creative theoretical exploration and verification of marketing and consumer behaviour as well as fundamental and cross-cultural studies of marketing science.