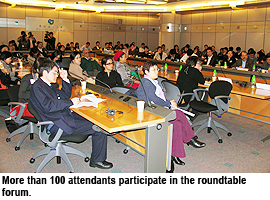 "Tackling Poverty in Hong Kong: What's Next?" , the first such forum of the Hong Kong Policy Roundtable Series, was jointly organised by the Governance in Asia Research Centre (GARC) of CityU and SynergyNet and attracted more than 100 attendants. The forum demonstrated the University's concern for community development. CityU has taken an increasingly pro-active role in addressing public policy and governance issues.

"Though working in the academy, we are not only teaching students but also collaborating with communities to assume a role in public policy and 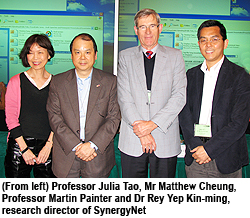 Professor Tao said both local and overseas academics would be invited to provide an introduction at the forum, followed by a panel discussion featuring speakers from relevant organisations. The forum would also invite relevant government officials to respond to views raised during the discussion. She added that comments discussed at each forum would be consolidated into a quarterly Policy Journal that would be made available both online and in hard copy form.

The roundtable on 23 February was attended by Mr Mathew Cheung Kin-chung, Secretary for Labour and Welfare of the HKSAR Government. Professor (Chair) Stephen Cheung Yan-leung, from the Department of Economics and Finance of CityU and Dr James Lee Kin-ching, Associate Professor in the Department of Public and Social Administration, participated in the discussion.

The forum consisted of two sessions, with the first focusing on theories of poverty and an international overview, including a definition of poverty, poverty removal mechanisms, participation of voluntary agencies and districts, specified poverty removal policies for different groups and the modernisation of the social welfare system. The second session focused on evaluating the Government's approach to poverty.

The Hong Kong Policy Roundtable Series includes four roundtable forums, tackling some of the most contentious areas of public policy in Hong Kong. The second forum on health care financing and reform will be held in May.

Workshop explores ethics in the face of biotech breakthroughs