The Chinese Civilisation Centre of City University of Hong Kong (CityU) has invited the renowned National GuoGuang Opera Company of Taiwan to come to Hong Kong for Peking opera performances from 19 to 22 February, in a bid to promote this traditional art to local young people. GuoGuang Opera will perform two newly adapted classic plays, Mr Goodman Dumps his Wife and Song Jiang Kills his Mistress. In addition, the Opera Company will also host seminars and appreciation talks. Their performances and related activities demonstrate the active promotion of Chinese culture and traditional arts by CityU.

Following the overwhelming success of Kunqu opera performance staged earlier, the Chinese Civilisation Centre wishes to introduce the important art of Peking opera to the young generation. Professor Cheng Pei-kai, Director of the Centre, said, “As a traditional Chinese drama with a history of over 200 years, Peking opera has significant impact on the performance art for the past century.” 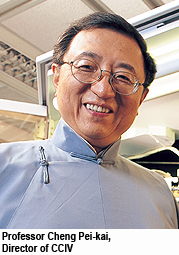 Professor Cheng pointed out that GuoGuang Opera is able to employ contemporary drama elements to express the content of traditional plays. Audience can then know about the social life of China at that time from a new perspective. “There are a lot of traditional values expressed in Peking operas, for example, superiority of men over women and the emphasis of patriotism and chastity. However, if the operas are performed in their traditional form, we may not fully appreciate such values from our ethical viewpoints of today,” said Professor Cheng.

The two plays, Mr Goodman Dumps his Wife and Song Jiang Kills his Mistress, to be performed by GuoGang Opera share the same theme that reflects the difficult situation of women in the Chinese society in earlier days. Adapted from the traditional play Imperial Tablet Pavilion, Mr Goodman Dumps his wife not only sarcastically depicts the pedantry of a husband in the play, but also attempts to reflect the mindset and psychological changes of women in the traditional society. On the other hand, Song Jiang Kills his Mistress is a tensed drama about a murder with three characters in an intrigued love affair that adapts various scenes from two traditional Peking operas, Sitting in a Wine House and Stabbing Lady Xi, and a Kunqu opera, The Woman’s Ghost Grabs her Lover Alive.

The two opera performances will be held at Wei Hing Theatre of CityU at 7 pm on 21 and 22 February respectively. Free tickets are available at the Chinese Civilisation Centre on the 6th floor of the Amenities Building at CityU. For enquiries, please phone 21942477.