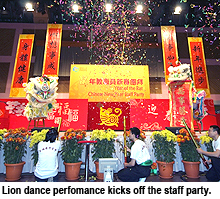 CityU staff celebrated the arrival of the Year of the Rat at a party on 15 February organised by the Human Resources Office.

Having enjoyed an array of delicacies at lunch, and visited the Chinese traditional crafts stalls lining the U-circle, staff members were seated in the Chan Tai Ho Multi-purpose Hall for a programme that opened with a Lion Dance followed by greetings from University Acting President Professor Richard Ho Yan-ki.

Professor Ho wished staff good health and every success in the Year of the Rat. He said that while rats increased in quantity he hoped CityU students and teachers would see increase in quality in the coming year.

Professor Ho expressed three wishes for the coming year: firstly, that staff could spend more quality time with their family; secondly, that they could devote more time to students; and lastly, that they could give a hand to the needy. He encouraged staff to support the University's campaign to raise funds for victims of the snowstorms in the mainland, for example, by donating lai see (lucky red packets).

Accompanied by all department heads and two faculty members dressed as the Chinese God of Wealth, Professor Ho distributed lai see and good wishes to the assembled colleagues. 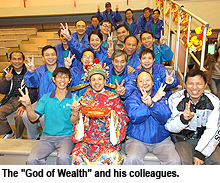 To support the first official CityU runners in the Standard Chartered Marathon, Professor Ho presented the group with a flag. Professor Paul Lam Kwan-sing, Acting Vice-President for Undergraduate Education, led the group in a run around the hall, to accept staff's encouragement. The programme ended with lucky draws and karaoke performances.