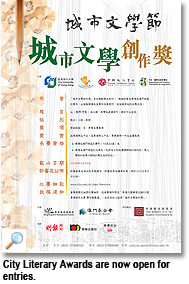 City University of Hong Kong (CityU) is hosting the third City Literary Awards, a writing competition that is now open for entries. Through the competition, CityU is encouraging youngsters to participate in creative writing and promoting the literary culture of Hong Kong and Macau.

The theme of the competition is "City Movement" and there are three categories: prose, short story and poetry. All local and Macau residents aged between 15 and 24 are welcome to take part.

"For a person brought up in the city, their habits and personality are greatly influenced by the idea of movement. We would like to know more about the relationship between people's lifestyles and the city, thus we chose the theme 'City Movement'," Dr Ma Ka-fai, Assistant Director of the Chinese Civilisation Centre said. 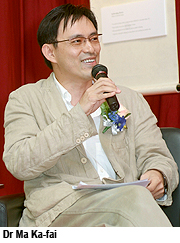 "City movement is a subjective concept and it worth us indulging in a degree of self-introspection. Through this competition, I wish to encourage youngsters to use words and creative writing to express their feelings about the city and how a person can cope with this idea and be a part of it," Dr Ma added.

There are three top prizes and merit awards for each category. The champion, first runner-up and second runner-up of each category will receive $5,000, $3,000 and $1,000, respectively. The deadline for submission of entries is 29 February 2008 and the results will be announced in May 2008. All winning entries will be published in the third issue of City Literature at the end of 2008.

City Literary Awards are hosted by CityU's Cultural and Sports Committee, the Chinese Civilisation Centre and the Department of Chinese, Translation and Linguistics, in collaboration with the Hong Kong Arts Development Council and Macao Foundation. It is sponsored by the Robert H. N. Ho Family Foundation.

The competition is one of the events of the City Literary Festival, the theme of which is "City Movement". Well-known local and overseas writers will share their thoughts and writing experience at a number of seminars in Hong Kong and Macau between 17 April and 22 April 2008.

Details of the third City Literary Awards are at http://www.cityu.edu.hk/ctspc/literature .For further information, please call 2788 8029.