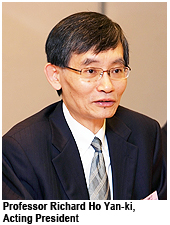 The aim was to look at how the concept of social capital helps rehabilitants to be accepted by society in relation to social networking, care and trust within a society and the participation of social groups. The forum revisited current strategies based on the social capital concept employed by the Correctional Services Department. The forum also provided a platform for the Government, academics and NGOs to strengthen their networks and contacts.

Professor Richard Ho Yan-ki, CityU’s Acting President, said he was delighted that the Correctional Services Department had invited CityU to co-host the forum and that taking part in the discussions was a valuable opportunity. 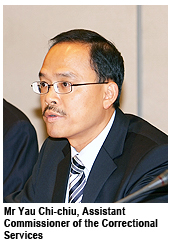 Professor Ho said the social capital concept would contribute to the stability of society and that the forum was an actual demonstration of the concept, encouraging the participation of all members of society.

Mr Yau Chi-chiu, Assistant Commissioner (Rehabilitation) of the Correctional Services Department, thanked the NGOs for supporting both the department and the rehabilitants. The department would like to work closely with CityU and the NGOs to further improve rehabilitation services and build a harmonious and stable society, he said. 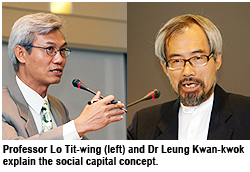 Dr Leung Kwok-kwan, Director of CityU’s Quality Evaluation Centre, said the concept of social capital was one of the four major driving forces in the development of modern society. It referred to the institutions, relationships and norms that shape the quality and quantity of a society's social interactions. In other words, social capital is not just the sum of the institutions which underpin a society; it is the glue that holds them together. 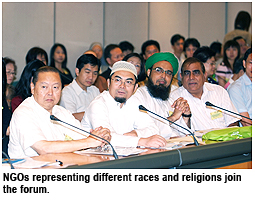 Professor Lo Tit-wing of CityU’s Department of Applied Social Studies said the concept could also be applied to the latest rehabilitation projects conducted by the Correctional Services Department. He said enhancing social capital could help reduce conflict in society and support for rehabilitants was crucial to successful rehabilitation in Hong Kong.

In addition, there were two separate discussions on rehabilitation services for juveniles and adults. Mr Chan Wai-to, Senior Lecturer in CityU’s Division of Social Studies, took part in the discussions.