City University of Hong Kong (CityU) will confer honorary doctoral degrees on Dr Chan Sui-kau, Professor Claude Cohen-Tannoudji, Ms Elizabeth Wang Ming-chun and Sir Gordon Wu Ying-sheung in recognition of their significant contribution to education, learning and the well-being of society. The award ceremony will be held in November 2007 during the University’s Congregation. 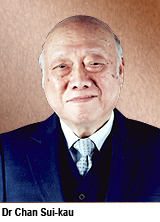 Dr Chan Sui-kau, founder and Executive Chairman of Yangtzekiang Garment Limited, will receive an Honorary Doctor of Social Science. Dr Chan, a prominent industrialist and philanthropist, has contributed greatly to the promotion of industrial development in Hong Kong and supported education in Hong Kong and the mainland for decades. CityU’s Student Hall 5 was named in April 2006 after Dr Chan in appreciation of his contribution to education in Hong Kong. He has been active in public and community services. Apart from sitting on many government advisory boards, Dr Chan previously was a member of the Chinese People’s Political Consultative Conference, Chairman of the Clothing Industry Training Authority, Chairman of the Textile Council of Hong Kong and President of the Federation of Hong Kong Garment Manufacturers. He has won many awards, including a Gold Bauhinia Star from the Hong Kong Government and an OBE (Officer, Order of the British Empire) from the Queen of England. 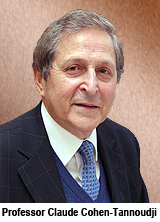 Professor Claude Cohen-Tannoudji, a Nobel laureate, will receive an Honorary Doctor of Science. Professor Cohen-Tannoudji, who specializes in atomic and molecular physics, has contributed significantly to the field of physics. He was a professor at the College de France in Paris between 1973 and 2004 and he lectures widely in other universities including Harvard University and CityU. In February 2007, he gave a public lecture at CityU titled “Measuring time: atomic clocks and ultracold atoms”. Professor Cohen-Tannoudji’s research into radiative forces on atoms in laser light fields, laser cooling and trapping has had a deep impact on many aspects of physics. He was awarded the Nobel Prize in Physics in 1997 for the development of methods to cool and trap atoms using laser light. He is a member of the French Academy of Sciences and a Foreign Member of many academies, including the US National Academy of Sciences. He is a recipient of many awards, medals and prizes, and among which, he is a Commandeur de la Legion d’Honneur and Commandeur de l’Ordre National du Merite (of France). 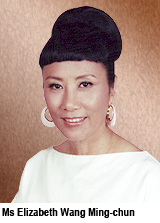 Ms Elizabeth Wang Ming-chun, an acclaimed artist, will receive an Honorary Doctor of Letters. Ms Wang has contributed significantly to the community and in particular to the art and cultural development of Hong Kong. Ms Wang has starred in many well-known TV drama series since 1967 and received many awards. Along with acting, she has developed a successful singing career, including winning the “Golden Needle Award” in 2005. Ms Wang’s support of Cantonese opera and the education of young Cantonese opera singers has won her applauses. She has played a pivotal role in saving the Sunbeam Theatre where Cantonese operas are performed. Her hard work, dedication and innovative ideas propelled her to become the first woman to chair the Chinese Artists Association from 1992 to 1997 (and again in 2007-2009). She has been a member of some government advisory bodies, a delegate to the National People’s Congress from 1988 to 1997 and currently a member of the Chinese People’s Political Consultative Conference. Ms Wang has been active in community services. She was previously a director of Po Leung Kuk and Po Oi Hospital and currently is an Executive Committee member of the Hong Kong Anti-Cancer Society. The Hong Kong Government awarded her in 2004 with a Silver Bauhinia Star. In 2007, she won a Montblanc de la Culture Arts Patronage Award. 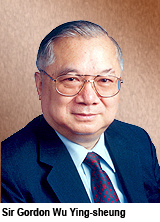 Sir Gordon Wu Ying-sheung, Chairman of Hopewell Holdings Ltd. and former Council Chairman of CityU, will receive an Honorary Doctor of Social Science. Sir Gordon has been an active participant in public service and contributed significantly to the socio-economic development of Hong Kong and the region. He graduated from Princeton University with a Bachelor of Science degree in Engineering in 1958. He has designed and built numerous property projects in Hong Kong and hotels, power plants and roads on the mainland and overseas. He is a member of many government and community organizations, including the Chinese People's Political Consultative Conference, the Hong Kong Logistics Development Council and the Greater Pearl River Delta Business Council. He has received many honorary awards from local and overseas universities and institutions, including an Honorary Doctor of Business Administration from the UK's University of Strathclyde. His other distinguished awards include a Knight Commander of the Order of St. Michael and St. George from the Queen of England, a Gold Bauhinia Star from the Hong Kong Government and an Officier de L'Ordre de la Couronne (Officer of the Order of the Crown) from the King of the Belgians.