Acting President urges new students to get prepared for changes 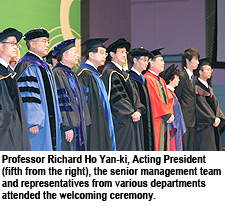 Students new to City University of Hong Kong (CityU) were welcomed to their new life on campus with the key message that they should prepare well for future changes.

The students were taking part in a series of welcoming ceremonies organized by Student Development Services under the theme "Change begins in CityU - From student to professional" on 24 August and from 28 August to 30 August. 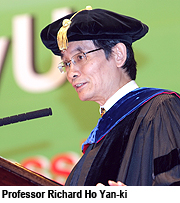 The ceremony began with a short film about life at CityU and the achievements of our staff and students.

"New students always add something new because they bring new hopes, new challenges and excitement," said Professor Ho as he welcomed the students to the CityU family. 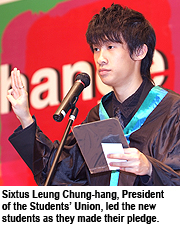 A university was a place to make dreams come true, Professor Ho said, encouraging students to take every opportunity to transform themselves into professionals, and reminding them that their future development should focus not only within Hong Kong but globally as well.

"In the coming three years, you need to improve your proficiency in English and develop a global mindset so that you can cope with the needs and challenges of the future," he continued. 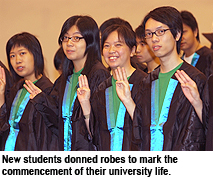 The highlight was the robing ceremony marking the commencement of university life in which Sixtus Leung Chung-hang, President of the Students' Union, led the new students as they donned their CityU robes and pledged their commitment to the University. Staff and students then sang "City Legend", the theme tune from City Legend, the musical produced to celebrate CityU's 15th anniversary.

As a follow up, departments and units will organize more orientation activities to familiarize students with their new communities.