SLW establishes International Advisory Board to enhance teaching and research

The School of Law (SLW) at City University of Hong Kong (CityU) has formed an International Advisory Board (IAB) comprising renowned professors from Harvard, Yale and Oxford universities and experienced legal practitioners in order to further enhance teaching and research at the School.

Co-chaired by Dr Simon Ip Sik-on and Dr Michael J Moser, the IAB consists of 13 members, nine of whom are renowned academics from overseas law schools and the other four, including the co-chairmen, are well-known legal practitioners. By sharing their valuable experience in legal practices and education, the IAB members will help the School of Law to cope with the challenges of a globalized legal education environment.

Dr Ip is a solicitor, educator and a notary public who has served a number of local tertiary institutions. He was a legislative councillor (1991-1995) and President of the Law Society of Hong Kong (1987-89). Dr Moser, an attorney-at-law and a partner with O’Melveny & Myers LLP, has been named among the top 500 lawyers in the Asia-Pacific region by Asia Pacific Legal 500.

Other members on board include:

l Mr Philip Dykes SC, a practicing barrister (Senior Counsel) in Hong Kong who was elected Chairman of the Hong Kong Bar Council in 2005 and 2006;

l Professor Timothy Endicott, Professor of Legal Philosophy and Dean of the Faculty of Law, University of Oxford;

The IAB will hold its inaugural meeting and a roundtable discussion on “Globalization and Legal Education” on 31 August, in which seven of its members will share their perspectives on legal education along the veins of globalization. 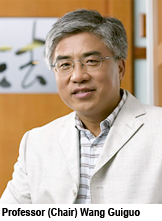 Initiated by Professor (Chair) Wang Guiguo, who has been appointed as CityU’s Dean of the School of Law for a term of three years with effect from 1 August 2007, the IAB also aims to promote the School at an international level.

“Strengthening ties and promoting exchanges between the School and professional bodies and overseas law schools will be one of my priorities because it will provide our students with more opportunities for international exposure,” Professor Wang said.

“I am honoured by the appointment and will try my very best to cope with this challenge,” he added.

Professor Wang joined CityU in 1991. He graduated from Beijing Foreign Studies University. He was the first Chinese recipient of a United Nations Institute for Training and Research Fellowship which enabled him to study at the International Court of Justice, the Hague Academy of International Law, the Office of Legal Affairs of the United Nations, and the Legal Department of the World Bank. He obtained his LLM from Columbia Law School in New York and a JSD degree from Yale Law School. His research interests include World Trade Organization Law, International Economic Law, International Banking and Financial Law, International Investment Law, Comparative Law and Chinese Law.