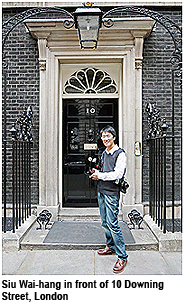 Siu Wai-hang, a Year 1 student in the School of Creative Media at City University of Hong Kong (CityU), went to London this May as a photojournalist under the sponsorship of the “Media.UK” project organized by the British Consulate-General in Hong Kong.

Siu spent two weeks in London taking photos of daily life and scenes from the streets for his project “Life in London” under the mentorship of Mr Dan Chung, a renowned photojournalist from The Guardian newspaper.

Siu was taken to several high-profile events during his trip, including a charity function with the former Prime Minister Mr Tony Blair, where Siu had his first taste as a photojournalist. 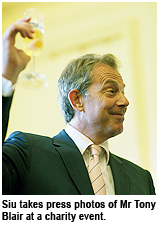 Siu’s London photos will be exhibited at the British Consulate-General in Hong Kong from 2 August to 17 August. This exhibition will include outstanding press photographs taken by leading Hong Kong and British photojournalists in the ten years since the handover. 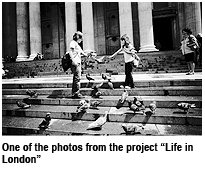 Siu said the trip to London had strengthened his conviction to become a photojournalist, having been interested in photography since secondary school. He thanked the School of Creative Media for helping to nurture his talent and he expressed his gratitude to the British Consulate-General for this valuable opportunity.

The aim of the “Media.UK” project is to nurture young photojournalists. Siu was selected as the candidate in January this year after submitting an outstanding portfolio and proposal.

A CityU student-photographer wins a traveling grant to the UK