The Language Information Sciences Research Centre at City University of Hong Kong (CityU) releases a comprehensive study of the most commonly used or marginalized Chinese words in usage over the past 10 years. The findings will be released at the Centre’s web site between 26 June to 29 June. Further discussion will be available in the coming week. 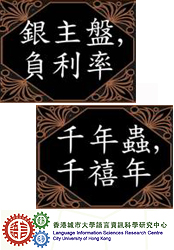 “During this period, many words from the mainland and other Chinese speech communities have been imported into Hong Kong, and at the same time many new words have been created in Hong Kong. With the 10th anniversary of the handover approaching, this is an ideal opportunity to review some of the more salient Chinese words and the stories behind them,” he said.

The Centre has processed over 200 million Chinese characters since 1995 using a unique synchronous corpus known as LIVAC. This corpus rigorously processes media text materials from several major Chinese speech communities, including Hong Kong, Macau, Beijing, Taiwan, Shanghai and Singapore. The data can be used for longitudinal studies of the linguistic characteristics of Chinese used in different speech communities around the world.

According to LIVAC, approximately 10,000 new Chinese words have emerged in Hong Kong in the last decade. Some have originated from mainland China, such as ‘黃金周(Golden Week)’, ‘自由行(individual visit)’; others stem from Taiwan, such as ‘第一家庭(The First Family)’, and ‘紅衫軍(the red shirted army)’.

“In addition to looking at the single cumulative frequencies of new words over the past decade, it is important to take into account the dynamic development of these frequencies,” Professor T’sou said.

“The occurrences of these words in the media have changed according to the currency of concepts or events they represent. Therefore, while these words reflect events that have been of concern to people in Hong Kong, they also provide interesting reflections upon Hong Kong culture.”

The new words identified by LIVAC can be divided into four major categories: