An electronic engineering student at City University of Hong Kong (CityU) has added to his clutch of local and international awards by winning yet another prestigious honour.

Chen Jiashu, a Year 3 student in CityU's Department of Electronic Engineering, has been 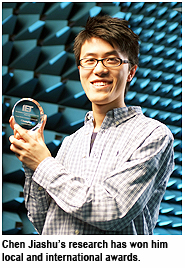 He is among 10 students worldwide to receive this Scholarship, which was awarded by the IEEE Microwave Theory and Techniques Society (MTT-S) in the US.

In addition, Jiashu won the championship in the Undergraduate Degree Group of the Younger Members Exhibition/Conference 2007, organized by the Institution of Engineering and Technology, Hong Kong.

This highly-talented student is no stranger to acclaim. He was awarded a highly-respected Fulbright Science and Technology Fellowship from the US Department of State earlier, one of 27 awardees worldwide, and the solitary recipient from Hong Kong.

The Fulbright Fellowship will sponsor his PhD studies at the University of California, Berkeley, upon graduation from CityU.

Jiashu said he was delighted to receive these awards, saying they were a great source of encouragment, giving recognition to his work and motivating him to do better. In addition, these awards exemplify CityU's commitment to excellence in both teaching and applied research.

"I have cherished the learning opportunity at CityU. The atmpsphere on campus is really conducive to studying and conducting research, thanks to my supervisor, my mentors and fellow students for all their guidance and support ," he said.

"Jiashu not only excels academically, but, more importantly, he is conscientious in whatever he works on and his good learning attitude has helped him to earn these awards," Professor Chan said.

Jiashu's award-winning research is the topic of his final-year project, which explores ways to enhance the performance of RFIC in wireless communication devices. After further studies at the University of California, Berkeley, Jiashu plans to return to China to help advance the burgeoning wireless communication industry.