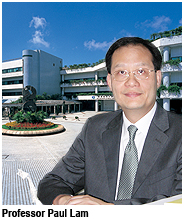 Professor Lam said it was a great honour for him to take up the new appointment.

“We are now entering a critical stage of development,” Professor Lam said. “The four-year normative curriculum will be implemented in a few years time and, as links between Hong Kong and the mainland strengthen, recruiting mainland students is becoming an increasingly important part of the University’s agenda. Policy making at CityU in the coming year will be crucial to future development, and so it is a great honour for me to take up such an important role at this stage.”

He has taken up a number of important administrative positions at CityU. Since 2004, he has been Associate Dean of the Faculty of Science and Engineering and Director of the Cooperative Education Centre. He has also been appointed as Acting Head of the Department of Biology and Chemistry since 2006. He has served as the Chairman of the Selection Committee for the Teaching Excellence Awards since 2005. He is currently Professor (Chair) of Biology.

Professor Lam obtained his bachelor’s and master’s degree from the University of Hong Kong, and he studied for his PhD at the University of Sheffield, UK. His research interests include biomarkers of xenobiotics, biotoxins, ecotoxicology, environmental toxicology and risk assessment.