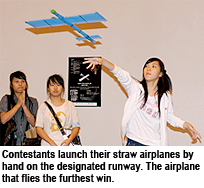 More than 1,300 secondary school students from over 130 schools in Hong Kong and Macau joined the “Inter-secondary School Straw Airplane Competition” on 22 April organized by City University of Hong Kong (CityU).

The competition was in its tenth year. Its aim was to inspire secondary school students to find out more about science and give them the freedom to express their creativity through fun games.

The contestants put their knowledge of physics to good use when they gathered at CityU to test their skills. In groups of three to four, they had to build their straw airplanes in 90 minutes using 150 straws, 80 metres of string and around 25 grams of Play-Doh. Contestants had to launch their straw airplanes by hand on the designated runway. The airplane that flew the furthest won. 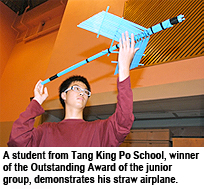 There were 160 teams in the junior group (Forms 1-3) and 200 in the senior group (Forms 4-7). Both had awards for the championship, first and second runner-up, with trophies and book coupons worth $1,500, $1,000 and $500, respectively. There were also trophies and book coupons worth $250 for the best design and for three outstanding teams selected from both groups. At the end of the full-day competition, Shap Pat Heung Rural Committee Kung Yik She Secondary School took home the championships for both the senior and junior groups.

“The competition helps strengthen secondary students' knowledge about physics and encourages them to apply theories in a more creative way,” said Professor Henry Chung Shu-hung, Associate Dean of the Faculty of Science and Engineering. “We hope to nurture their interest in science and let them experience knowledge in real practice.”

This is one of the largest science competitions hosted by CityU and an important portal for outreach to secondary schools. The competition has been well received by the community over the years and has become a designated activity for many schools.

“CityU students took care of everything, from theme design and event promotion to the programme rundown for a competition that attracts over 1,000 participants,” said Dr Shek Chan-hung, Associate Professor of the Department of Physics and Materials Science. “They get to learn about organizational skills and teamwork.” 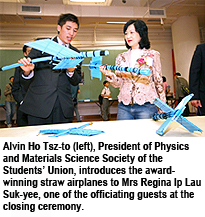 Alvin Ho Tsz-to, President of Physics and Materials Science Society of the Students’ Union, said organizers started preparations four months before the competition started. They promoted the event in many secondary schools, liaised with the different organizers and interested parties, and on the day of the competition managed 130 student helpers.

“Everyone was very happy to see the competition successfully hosted, especially since there were several difficulties to overcome,” Alvin said. ”This experience has enhanced our ability to organize a big event and deal with unexpected situations.”