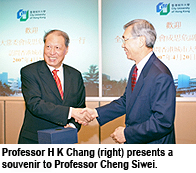 Professor Cheng Siwei, Vice-Chairman of the National People’s Congress Standing Committee, visited City University of Hong Kong (CityU) on 20 April with a delegation from six mainland universities. The purpose was to establish relationships with CityU. 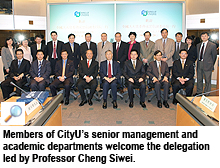 In his welcoming speech, Professor Chang said this visit was particularly memorable, even though he had received many mainland and overseas guests in recent years. “I will retire in 10 days and I remember the first honoured guest I received at CityU was Professor Cheng Siwei, our then Honorary Professor,” Professor Chang said.

In his talk, Professor Chang treated the guests to an introduction to the development of CityU. He said CityU had undergone two major phases since its foundation 23 years ago. It has shed its polytechnic status and become a major university, and it is now rising in worldwide university rankings, including exercises conducted by the Times Higher Education Supplement and Shanghai Jiao Tong University.

The achievement which he was most proud of, however, was that CityU was the first university in Hong Kong to implement compulsory Chinese civilization courses in the undergraduate curriculum.

Professor Cheng said he was very pleased to be back at CityU. His first visit to Hong Kong in 1997 was to attend the International Conference of Chinese Culture and Modern Management at CityU. “I am delighted to visit CityU again before Professor Chang retires,” he said.

Professor Cheng encouraged the representatives from both sides to use the time to get acquainted and build links.

Professor Cheng Siwei said he was impressed by courses that cultivated patriotism among teenagers.

In addition, the guests toured the School of Creative Media under the guidance of Dr Louisa Wei Shiyu, Assistant Professor in the School, learning about the laboratories and courses and watching a few short films shot by teachers, students and graduates.

The delegation then went to the Run Run Shaw Library to have a general picture of the University’s learning facilities.