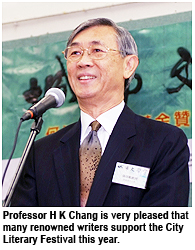 The second City Literary Festival, organized by City University of Hong Kong (CityU), is being held from 30 March to 2 April. Prominent writers have been invited to the symposiums and exchange forums, which are being held in Hong Kong and Macau. The Festival aims to promote literature in the two cities and encourage youngsters to write.

Professor H K Chang, President of CityU, welcomed the guests. “I would like to thank our renowned guests who have made it possible for us to hold the Festival again this year. CityU students as well as local youngsters will be able to learn a lot from them,” he said.

The first symposium of the Festival, themed “City Changes and Road of Literature”, followed the opening ceremony. The guests shared their thoughts on writing and their experience and understanding of city changes with the audience.

Ms Zhang Yihe said non-fiction prose is a genre with a distinctive personal style that reflects the thoughts and feelings of the author. Professor Pai Hsien-yung said there is a promising future for short story writing in Hong Kong. The city has a unique culture and is full of stories that can inspire literature, he added. 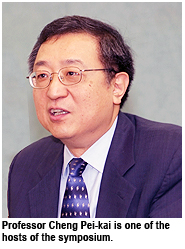 “We are very glad that many renowned writers are supporting this activity again this year and sharing their writing experience with people in Hong Kong and Macau,” said Professor Cheng Pei-kai, Director of the Chinese Civilisation Centre. “It is a great chance for literature lovers to learn more about writing.”

In order to promote literary writing among youngsters, a new exchange forum for young writers is being held in the morning on 31 March. Accomplished local young authors such as Mr Wong Yi-hing talked about their writing experience. The closing activity of the Festival will be held in Macau on 2 April.

The Festival is supported by the Hong Kong Arts Development Council as co-organizer and The Robert H N Ho Family Foundation as sponsor. The guest speakers will also act as judges for the City Literary Awards while they are in town. This key activity has extended its entry requirements to include youngsters aged 15 to 24. The Awards received more entries than in last year and the results will be announced in April.