The City University of Hong Kong (CityU) Choir and Peiyang Chorus of Tianjin University jointly presented “The Exchange Concert of CityU and Tianjin University” in the evening of February 6th at Wei Hing Theatre in CityU. The CityU Choir debuted the musical A Wide Wide World Out There based on a true story. The concert ushered in a series of exchange activities while marking a new undertaking to promote joint musical performance by university students from Hong Kong and mainland China..

The CityU Choir will also join the CityU Philharmonic Orchestra and the Peiyang Art Troupe of Tianjin University to perform Mahler’s Symphony No 2 in C Minor, Resurrection, in the evening of February 9th, illustrating another new orchestral endeavor by university students in the Greater China region.

Professor Chang said, “CityU attaches great importance to whole-person development and cultural exchange activities. This concert helps to broaden our students’ horizon and develop their talent. We expect to increase cultural and art exchanges with mainland universities through more such activities.”

Professor Liu Jianping, Chairman of the Administrative Council of Tianjin University, echoed Profession Chang’s comment by pointing out that Tianjin University shares CityU’s emphasis on a holistic approach to education. He said, “Musical cultivation plays an important role in students’ professional study, character development and international exchange. It is an important element in art education.” During his visit to the Chinese Civilisation Centre and the School of Creative Media, Professor Liu was deeply impressed by CityU’s initiatives and expressed interest in adopting similar practice on the mainland. 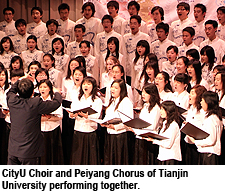 Through songs, dance and drama, the debut of musical A Wide Wide World Out There paid tribute to the fortitude and compassion of a deceased CityU student Dzi Mou. Dzi Mou died young after contracting HIV during a blood transfusion for congenital leukaemia,.

By presenting the musical A Wide Wide World Out There based on Dzi Mou’s book of the same title, CityU students hoped to generate public support for AIDS patients and their families, demonstrating a strong sense of social concern and responsibility of young intellectuals. “This musical comes straight from our hearts. And we hope the audience will open their hearts to it,” said Dr Ruth Yee Wing-yu, Associate Director of CityU Student Development Services and coordinator of the exchange activities as well as producer of the musical. 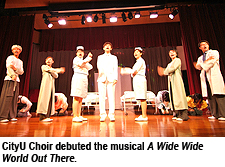 Sharing his feelings on the joint performance, Mr Michael Poon Lap-hang, President of the CityU Choir, said the CityU singers had not known their Tianjin counterparts very well before the concert, but they soon became better acquainted after rehearsing together. Mr Xu Meng, President of the Peiyang Chorus of Tianjin University, added that since one of songs, “The City Legend”, on the programme was to be sung in Cantonese, the Tianjin group had asked two students from Guangdong to teach them some of the language.

There was a series of cultural activities between the musical troupes of the two universities during the week. The Resurrection, conducted by Mr Elahiu von Erlenbach, was jointly preformed at the City Hall.

Mr. Jason Tang Yin-pong and Mr. Xu Meng, presidents of CityU Philharmonic Orchestra and Peiyang Symphony Orchestra of Tianjin University respectively, said that it was the first endeavor by Chinese university students to perform Mahler’s Resurrection. Students from both universities worked hard separately to prepare for this demanding piece. To their pleasant surprise, they played well together at rehearsals in Hong Kong. Professor Ren Baoping, director of the Arts Education Center of Tianjin University, said it was with great determination and concerted efforts of teachers and students alike that the performance of Mahler’s Resurrection could be achieved.