A postgraduate law student at City University of Hong Kong (CityU) has been selected as a Young Global Leader 2007 by the World Economic Forum in recognition of his achievements and contributions to society.

Mr Christopher To Wing, who has been trained extensively in law at CityU, is the only nominee from Hong Kong to receive the honour this year. 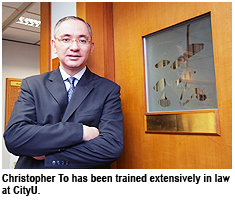 Mr To is an Adjunct Professor in both CityU's School of Law and Department of Electronic Engineering, and Secretary-General of the Hong Kong International Arbitration Centre (HKIAC). He is currently studying for the Postgraduate Certificate in Laws at CityU. He graduated from the Master of Arts in Arbitration and Dispute Resolution and the Bachelor of Laws degree programmes at CityU in 1996 and 2006, respectively.

Renowned for helping establish Hong Kong as the region's leading arbitration centre, Mr To said he was motivated to receive training in law at CityU because of the distinguished programmes on offer and the quality of the teaching staff.

"CityU is the first university in Asia to offer the MA in Arbitration and Dispute Resolution, demonstrating its foresight in nurturing professionals to meet an increasing need for experts in arbitration," he said. 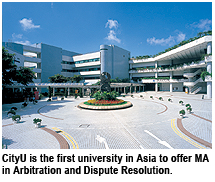 Hong Kong now ranks fourth in the world in terms of arbitration caseload, following the mainland, the US and Europe.

Professor Peter Malanczuk, Dean of the School of Law and the leader of the MA programme, said arbitration and dispute resolution was one of the strengths of the School, and it had been working closely with Mr To and HKIAC to promote the profession.

"Mr To is an outstanding graduate and student, who is a close friend of the School and has spent time helping and working for it," Professor Malanczuk said.

Taking the MA programme at CityU helped steer Mr To from the engineering profession to his current career. In 1998, at the age of 29, he was invited by a former High Court Judge, Mr Neil Kaplan, an Honorary Professor on the MA Programme that Mr To attended, to take up the post of Secretary-General of the HKIAC.

At first Mr To hesitated, considering he might be too young for the job, but he decided to accept the challenge, and he has had no regrets. Since then, Mr To has been heavily involved in promoting Hong Kong as a world-recognized dispute resolution centre. The number of arbitration cases handled has grown and Hong Kong has been authorized by the Internet Corporation for Assigned Names and Numbers to handle top-level domain name disputes such as .com, .org, .net, and so forth.

The World Economic Forum is a not-for-profit international organization based in Geneva, Switzerland, committed to engaging leaders in shaping the global, regional and industry agendas.

The Forum bestows the Young Global Leader award annually upon 250 of the most distinguished young leaders around the world who are below the age of 41. This year a total of 4,000 nominations were made.