A CityU student-photographer wins a traveling grant to the UK 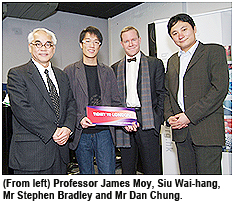 A picture paints a thousand words.

A budding photographer from the School of Creative Media at City University of Hong Kong (CityU) will spend one week later this year traveling through the UK working as a photojournalist thanks to the British Consulate-General’s “Media.UK” project.

The aim of the project is to nurture young photojournalists. The winning student’s portfolio of pictures will be shot in the UK and will be exhibited later in the year in Hong Kong. Siu Wai-hang, a Year 1 student in the School of Creative Media, was selected as the eventual winner from five short-listed finalists. He will travel to London and work on a series of photographs under the theme “The Life in London”. 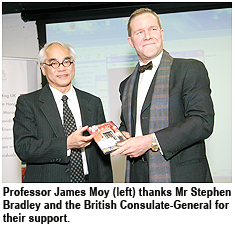 Professor James Moy, Dean of the School of Creative Media, thanked the British Consulate-General for its enthusiasm in nurturing the next generation of photojournalists. “We all take photographs when we travel and it is the well-trained eye that can tell the world compelling stories through the lens. We are grateful to the contribution of the British Consulate-General for sharing our conviction in promoting visual literacy,” he said. 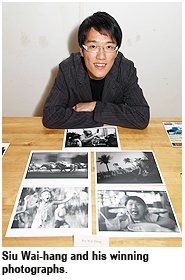 In addition to providing the travel grant, the British Consulate-General has invited Mr Dan Chung, a prominent photojournalist from The Guardian, to give a talk on the power of photojournalism. The talk is entitled “How technology is changing the role of the photographer in the mass media”.

British Consul-General Mr Stephen Bradley said: “We are delighted to support this project to develop young journalistic talent in Hong Kong and to promote journalistic ethics. We look forward very much to seeing the winner’s work on his return from the UK.”

In the competition, participants had to submit three to five photographs, a proposal, a plan for the one-week trip to the UK and the overall motif that they wished to express in the exhibition.