CityU sponsored by Shenzhen Government to research on new drugs

City University of Hong Kong (CityU) has been sponsored by the Shenzhen Municipal Government to establish a key laboratory, as well as to conduct a project on developing novel anticancer drugs. 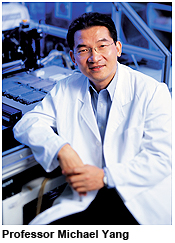 The Shenzhen Municipal Government will award CityU two grants totaling RMB 2 million yuan through its “Key Laboratories Sponsorship Scheme” and the “Shenzhen-Hong Kong Innovation Zone Scheme”. “The sponsorships underscore the excellence of CityU’s applied research and the innovativeness of its researchers,” said Professor (Chair) Roderick Wong Sue-cheun, CityU’s Vice-President for Research and Dean of Graduate Studies. “This is an indication that our university’s applied research work on the mainland has gained the recognition it deserves.”

A forerunner in applying biochip technology in the detection of illnesses, Professor Yang and his research team have been funded by the 863 Project under the Hi-tech Research and Development Programme of China to establish a functional genomics and biochip technology platform for drug discovery in the Biotech and Health Centre in 2003.

Through its “Shenzhen-Hong Kong Innovation Zone Scheme”, the Shenzhen Municipal Government also sponsored CityU RMB 0.5 million yuan on a Project on Research and Development of Novel Platinum-based Anticancer Drugs, also led by Professor Yang. The Project aims at developing a novel anticancer drug that overcomes drug-resistance and has fewer side effects.

“Successful application to the two grants demonstrates that CityU has the expertise and ability to take on key research projects,” Professor Yang said, “Establishment of the Key Laboratory will further integrate the University’s applied research activities on biotechnology.”

One major objective of the “Key Laboratories Sponsorship Scheme” and the “Shenzhen-Hong Kong Innovation Zone Scheme” is to enhance the development of innovative technologies in Shenzhen by encouraging participation from the higher education sector and cross-border collaboration.

CityU joined the SZVUP in 2000. Since then three institutional research centres, including the Biotech and Health Centre, have been set up. To further integrate applied research, incubation and teaching activities on the mainland, CityU established the Shenzhen Outpost in the SZVUP last year. A groundbreaking ceremony of the Shenzhen Outpost took place in October 2005.