City University of Hong Kong (CityU) hosted the first ever All China Economics (ACE) International Conference in a bid to foster exchange among scholars and professionals on economic issues concerning China and members of the Asia Pacific Economic Cooperation (APEC).

The conference, which showcases the University’s contributions to advancing economic cooperation and a sense of community among the Asia Pacific economies, was organized by the APEC Study Centre in CityU’s Faculty of Business. It was supported by the Education and Manpower Bureau in the Hong Kong Special Administrative Region (SAR) Government.

More than 300 participants from around the world attended over 200 academic presentations and seminars during the three-day event, which was held from 18 to 20 December. “The APEC Study Centre of CityU sees the need to have an occasion for scholars, academics and professionals to meet regularly and exchange their scholarly ideas” said Prof Matthew Lee Kwok-on , Acting Dean of CityU’s Faculty of Business. “The ACE International Conference is considered as an appropriate channel though which scholars from both APEC and non-APEC economies can engage in truly productive intellectual exchange.”

A highlight of the event was the keynote address given by Mr Frederick Ma Si-hang, Secretary for Financial Services and the Treasury of the Hong Kong SAR Government. At the conference banquet on 19 December, Mr Ma talked about the development of Hong Kong as China’s international financial centre. 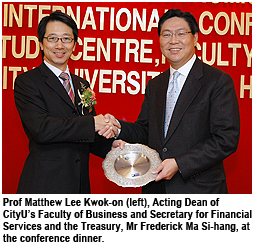 “We will continue to benchmark ourselves against the world’s leading financial centres in enhancing financial infrastructure, promoting market development and upgrading market quality.”

The banquet also featured guest speaker Mr Kwon Tae-shin, Permanent Representative of South Korea to the Organisation for Economic Cooperation and Development (OECD). He spoke about OECD and the Asian economies.

Professor Bharat Hazari, Visiting Professor in the Department of Economics and Finance at CityU, and renowned speakers from China and the rest of the world shared their expertise at keynote sessions. In addition, CityU academics had a joint seminar on 20 December with the Hong Kong Institute for Monetary Research of Hong Kong Monetary Authority.